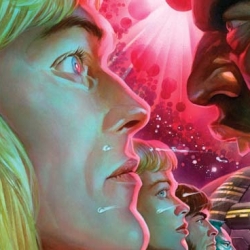 By JimmyFebruary 10, 2012No Comments3 Mins Read

Captain Victory faces the consequences of his actions from the last issue as Galactic Command puts Victory on trial for the genocide of the planet Kloon! Previously in Captain Victory:  Victory made the difficult decision to destroy the planet Kloon, and had his command questioned by his gunnery officer, Tarin. Their ship came to the attention of the evil Blackmass, Victory’s grandfather, and only forty-two crew members vanished in the incident. So they have that going for them, which is nice.

One trope of the space opera is to have the commander’s authority questioned, and sometimes go to trial for a difficult decision that he made. Sterling Gates handles this particularly well, using the trial as a framing story for some background on the character of Captain Victory. We get some of Victory’s backstory (including why he’s named Victory) from the perspective of Major Klavus. Ironically and fittingly, the backstory itself lands Victory in front of a disciplinary committee consisting of Klavus. Through this it’s revealed why Klavus trusts Victory.

Victory reveals he is the grandson of the inter-dimensional fear-god Blackmass and that he’s joined the Galactic Rangers to train THEM to fight his grandfather. Additionally, he took his name from the Rangers’ slogan, “Victory is Sacrifice.”

Gates couches the exposition beautifully in his dialogue, both external and internal. Weak comic book writers often fall into the rut of blatantly explaining important plot elements to the reader, but strong writing invites the reader to be a participant in the story—it’s a minor thing, but when Victory explains his name, he states that he took his name “From there. From the Rangers’ oath,” and the oath is printed on the wall behind him. This actively engages the reader in both the story and the art, making the audience peer deeper into the universe the writer is creating.

I complained about the art in the last issue not showing motion well, but I have no such complaints in this issue—the new artist, Steve Scott, does a wonderful job putting his own dynamic on all the characters while keeping the art similar enough to Wagner Reis’ that it’s not jarring going from issue 2 to this one.

BOTTOM LINE: An Improvement in an Already Good Series.

The story for this issue was enjoyable, and Sterling Gates continues to write a solid space opera. The new artist bumps this book up a bit from last issue, earning this four out of five stars from me.