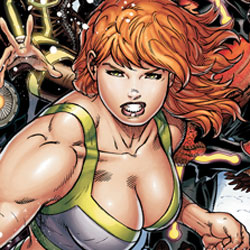 DC has announced another new title as part of the New 52, called The Ravagers, and the first cover has surfaced that shows off members of the teen team. So it looks like we have Caitlin Fairchild, Wendy of Wendy and Marvin fame, Timber Wolf, Jr., Havok II, Rose Wilson, and DC’s version of Fing Fang Foom, but only smaller… Foomzookie, maybe?

The art is by Ian Churchill, with Howard Mackie writing.  We should have more (if not all) the details next week when DC releases their Solicitations for May 2012.