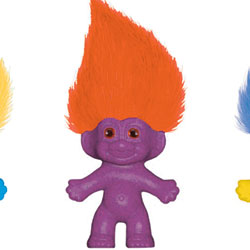 The Good Luck Trolls became one of America’s biggest toy fads in the early 1960s, and again in revivals over the years. In 2003, the Toy Industry Association commemorated them as one of the hundred most creative toys of the twentieth century. History repeats itself like never before in 2012, when Dark Horse Deluxe offers up these beloved and timeless figures in various iterations!

Thanks to a law passed by Congress, the US copyright for the Good Luck Trolls has been restored to its rightful Danish owner. Now Dam Things has licensed to Dark Horse the right to issue the Good Luck Trolls in the ever-popular “mystery box” style assortment, marking the first new troll products in the US in many years.

Dark Horse’s vice president of Product Development, David Scroggy, notes, “When we considered developing the Good Luck Trolls for the first time, we were confident that they would resonate with our audience of pop-culture fans and modern collectors. We think that they are likely to be embraced by our young-adult consumers.”

“Dark Horse has been very successful with the mystery box and we look forward to seeing them include the Good Luck Troll in their program,” says Calle Østergaard, CEO of Dam Things in Denmark.

This all-new assortment of colorful designs, featuring an array of hair colors and exotic surface treatments from glitter to metallic to flocked, are sure to stun both collectors and casual fans as they make their first appearance at Toy Fair 2012!

Please contact Dark Horse’s director of public relations, Jeremy Atkins, if you would like to set up a walk through at the show, where Dark Horse Deluxe will debut products to be released in spring and summer, including the Good Luck Trolls mystery-box assortment.