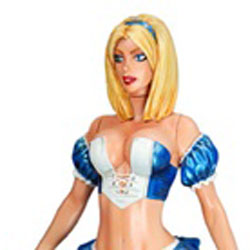 “We have wanted to create action figures based on our characters for a long time,” said Zenescope President Joe Brusha. “We’re extremely excited for that to finally happen and I can’t think of a better sculptor to bring these characters to life than Clay.”

The following action figures and toy lines will be on display at Toy Fair: Grimm Fairy Tales Alice Liddle Premium Action Figure
The CS Moore Studio returns to the world of action figures with Zenescope Entertainment’s strong and sexy heroines from the publisher’s wildly-popular Grimm Fairy Tales series! Sculpted by none other than Clayburn Moore, the stunningly beautiful Alice Liddle Action Figure stands 6” tall, features multiple points of articulation and comes with White Rabbit, Croquet Mallet and Potion Bottle accessories.  As a special bonus, each blister carded figure will include a copy of Zenescope’s sold-out Wonderland #1 comic book, with an exclusive cover available only with this figure! Monster Hunters’ Survival Guide Action Figures Series 1
Vampires, Zombies, Werewolves and Sasquatch: All have been encountered by the intrepid Monster Hunter! Relive the excitement of Zenescope Entertainment’s action-packed series with The Monster Hunters’ Survival Guide Action Figures Series 1 from the CS Moore Studio.  Series 1 features the fearless and highly trained Monster Hunter, Pitt, who stands 6” tall and comes equipped with a detailed base and an assortment of weapons perfect for any perilous situation.  Pitt’s formidable opponent is the 8-1/2” tall Sasquatch, who is spoiling for a fight with boulder and branch accessories and base.  A special, limited-edition white Yeti variant of Sasquatch is also planned. Grimmies
They’re cute! They’re curvy! They’re Grimmies.  Grimmies are a shapely reinvention of the highly-popular building block figure style, brought to you by the CS Moore Studio and Zenescope Entertainment! The line’s first release includes Grimmies of Zenescope’s memorable Grimm Fairy Tales characters from the publisher’s best-selling flagship comic book series. Sculpted by Clayburn Moore, Grimmies are designed so that some accessories and parts can be removed and shared between other figures in the line. Grimmies Grimm Fairy Tales Series One 3-Pack includes Alice, Snow White and Red Riding Hood. Each comes with the character’s trademark accessories. And you won’t want to miss The Grimmies Grimm Fairy Tales Alice & Mad Hatter 2-Pack. Each figure stands a curvaceous 2-3/4” tall and ships in revealing window box packaging.

Wonderland Board Game
Now you can experience Wonderland in a way no one has ever experienced before. The Wonderland series is one of the most popular comic book series Zenescope publishes and the company is proud to unveil the Wonderland Board Game. Experience a vibrant, twisted world, full of surprises, right in your living room! You can choose to play as one of your favorite characters including Calie, the Mad Hatter, Brandon, the Queen of Hearts, the White Knight and more!