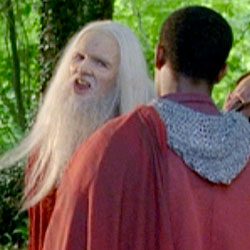 Can murder and comedy go hand-in-hand?  It can (and does) when your bewitched assassin is Merlin and his target is the King himself.  That’s the unlikely plot of “A Servant of Two Masters,” an all-new episode MERLIN premiering Friday, Feb. 10, at 10 p.m. ET/PT only on Syfy.

While saving Arthur’s life, Merlin is inadvertently captured by Morgana – who delights in torturing the young warlock, then placing him under her control with the use of a Fomorroh, a multi-headed serpent with deadly powers. Armed with the king’s most trusted servant, Morgana sends Merlin away with one mission: kill Arthur. “That was always what we had in our minds,” said co-creator and executive producer Johnny Capps: “to let the series grow darker, but never lose sight of its warmth and humor.”

Indeed, “A Servant of Two Masters” vividly demonstrates the unique vision for MERLIN of Capps and co-creator and executive producer Julian Murphy, established since the series’ inception, of balancing drama with comedy in a way all ages can enjoy – while always raising the stakes of the story and its outcome. “Our strategy for the show has always been to create an action-adventure show that appeals to and entertains the entire family,” Capps says. “The other important thing about Merlin is that each season we refresh it and, as the characters get older and the stakes get higher, then the series gets darker, just like in the Harry Potter films.”

This week’s episode takes the vision a step further by combining intensely dramatic scenes of Morgana torturing and abusing Merlin with images of a bumbling Merlin attempting to kill Arthur – by poison, crossbow and sword – that find their laughs in an honest, genuine way. “The darker we go, the funnier we go, too,” Capps explains. “That’s always been an important focus for us. No matter how dark the series gets, you never lose the emotional heart of it.”

“A Servant of Two Masters,” an all-new episode of MERLIN, airs Friday, Feb. 10, at 10 p.m. ET/PT only on Syfy.  All three seasons of MERLIN are now available on DVD and on iTunes.  Be sure to follow the latest news on MERLIN at the Official Merlin page on Facebook.