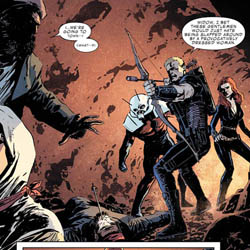 By Matthew Peterson on February 9, 2012 6 Comments

Or – “The ‘How Is This Secret?’ Joke Is Officially Played. What Else Have We Got?”

There are pluses and minuses to Marvel’s current editorial stance that everyone needs to be an Avenger.  The positive is that we get character interactions that we’ve never seen before (The Black Widow and the Valkyrie haven’t shared the screen very often, and the Ant-Man/Giant-Man team is one that I’m perversely fascinated with.)  The downside is that it often shuffles characters like The Beast, a high-profile 90’s X-Man, into a purely supporting role.  This book is about to launch it’s new cast, creative team, and raison d’etre, one which I hope is successful, based on the pedigrees of both writer and characters… Previously, in Secret Avengers:  Steve Rogers’ tenure as head of the nebulous superhero oversight committee (which, by the way, is a post that seems to have FAR too much power and not nearly enough regulation, if you look at what his predecessors did) has led him to create multiple Avengers mission forces for different tasks.  With his return to the scale-mail jerkin of Captain America, Steve has chosen one of his oldest friends (and most contentious students, I might add) to take over the ramrod spot in the Secret Avengers…  Unfortunately, not everyone on the team has been made aware of this fact in advance.

PERSONALITY CLASHES?  MUST BE THE AVENGERS.

I’m a fan of several of the new members of this team (though I’m a bit disappointed to see War Machine disappear from their ranks), so I’ve been looking forward to the Secret A’s new gig, but even I was not prepared for this issue.  I’ve occasionally chastised Marvel for their current cover policy (action shots of the team, generally with no background, and almost always done by a different artist) but opening a book with an Arthur Adams cover and transitioning to the work of Gabriel Hardman is visual dissonance on a massive scale.  We start the issue in an appropriately third-worldy corner of Pakistan, as a young mother discovers that she has some sort of super-powers.  I’m a little big troubled by the fact that she discovers this after being caught in the wake of a suicide bomber (a bit too ‘on the nose’, perhaps?) but it’s at least handled with some care.  Cut to Britain, where Brian “Captain Britain” Braddock is involved in literal class warfare, fighting a villain who apparently wants to occupy Buckingham Palace.  The Queen herself makes a brief cameo before Braddock is called away by Captain America to join his new team of Avengers.  Remender does wonderful character work here, with a misunderstanding quickly escalating into harsh words, and Hawkeye recapturing his role as official Avengers smart@$$ and ego-deflater.

The black ops Avengers have a new headquarters (which is pretty brilliant), and Gabrial Hardman gives each member his own body-language and personality.  Most impressive, he nails the hard-to-draw Alan Davis version of Captain Britain’s suit, and draws Val and Black Widow (who are currently two well-built women in black suits with various accessories) as invidual in facial and body structure.  The team quickly ends up in Pakistan, facing a horde of modified super-adaptoids, one of the most horrifying villains in the Avengers rogues gallery.  The fighty-fighty is brief, and each member gets their screen-time, while the only issues with Hardman’s art is related to telling the difference between the real team and their Adaptoid counterparts (which is a difficult proposition in any case.)  We end with a strange villain reveal that hints of more android involvement in future issues, an Avenger undercover, and a next issue blurb that promises the intervention of one Eugene Thompson, graduate of Midtown High.  The art itself is quite good (once your brain stops expecting Arthur Adams, mind you) and Remender leaves you asking all what the hell just happened in the way that makes you want to come back next time and find out the answers…

THE VERDICT:  THE GOOD KIND OF CONFUSING.

There are some rough edges here, as the color palette is a little too heavy on the neutral blue-grays for me, and there are issues with scratchiness in a few of the characters’ faces.  The last-page reveal has some shocks (rhymes with “Foom-Bot”) that could land on either side of the ‘Disappointing Reveal’ fence, and there is a clear class warfare subtext between Hawkeye the Can-Do Have-Not and Captain Britain the hoity-toity upper-class twit of the year.  (“Oh, dear!  Braddock has run himself over!”)  Still, it’s a strong issue for me, combining existing continuity bits with all-new material to synthesize something intriguing.

Secret Avengers #22 is a textbook example of how you successfully relauncha property, building on what has gone before without trashing or disrespecting it, and setting up the whole new status quo with deceptive ease, earning 4.5 out of 5 stars overall.  When your biggest complaint about this issue is that the awesome cover art and the awesome interior art are different kinds of awesome, you can be pretty sure the book is on the right track…