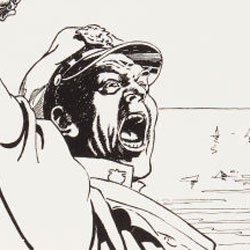 Heritage Auctions has announced it is offering up a rare ashcan of Action Funnies and Boy Commandoes on February 22, 2012.

“The books were consigned by Gary Colabuono, the foremost expert on Golden Age Ashcans,” said Ed Jaster, Senior Vice President of Heritage Auctions. “He’s spent nearly 30 years assembling his collection and thought the timing was right to sell a few of his treasures.”

The provenance of his Colabuono’s collection is unimpeachable: Most of them were purchased directly from former DC Comic President Sol Harrison, which adds a comics history perspective to these rarities.

“In the early days of comics publishing,” said Jaster, “a print run might have been in the hundreds of thousands, maybe even the millions. Yet only about 100 to 1,000 of a given issue of any comic survived. With these Ashcans, only two or three copies were made in the first place, so it’s a miracle that even one of these has made it.”

In the early days of comic book publishing, the most common procedure to secure a trademark for a potentially valuable title was to create an Ashcan edition of the proposed comic book – not to be confused with the modern-day term which commonly refers to mass-produced promotional booklets. Companies would simply create the title’s logo, affix it to a piece of existing cover art and shoot a Velox of it – a positive photographic print typically used by newspapers as a pre-press proof, accounting for the black and white, rather than color, covers on Ashcans. After that was created, it was trimmed to comic-book size and stapled to the interior of a previously published book, or sometimes just some loose story pages.

“For all practical purposes it had the appearance of a legitimate comic book – and since the U.S. Patent & Trademark Office (USPTO) apparently accepted them as authentic comic books for trademark registration, no higher authority in the country existed to dispute this claim,” said Jaster, “nor, apparently, did anyone ever seek to try.”

According to Colabuono, 10 of the books are either unique or the only other copies known to exist are in the DC vault. “DC will never sell any books from their vault,” he said, “so this may be the only chance for some collectors to ever own one of these. I can tell you that the thrill of holding one of these never goes away.”

The highlight of the lot is a rare copy of Action Funnies, considered one of the most important ashcans in existence. Only three copies are known to exist.

“DC wanted to protect the most important title in comic-book history, Action Comics,” Jaster said, “and it created this Ashcan to prevent competitors from publishing a comic book with a similar title.”

DC war collectors will note that two Big Five war titles are included in the auction. Unique copies of Star-Spangled War Stories (estimate: $6,500+) and All-American Men of War (estimate: $5,500+) should draw close attention, and romance collectors will note that the only DC romance Ashcan known to exist, Girl’s Love Stories (estimate: $5,000+), is included in the auction. The unique copy of Boy Commandos No. 1 (estimate: $8,000+) is also expected to generate great interest, giving collectors of Jack “The King” Kirby a chance to add an Ashcan to their collection.