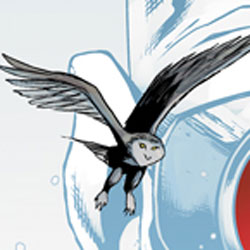 We’ve seen almost all of Batman’s villains appear in the Bat-titles, but until today, we hadn’t seen Mr. Freeze.  Good news, we won’t have to wait that much longer.

Mr. Freeze is scheduled to appear in Batman Annual #1 that arrives in stores in May, 2012, and ties into the Court of Owls multi-title event.

“Mr. Freeze is a character full of pathos and tragedy and at the end of the day, he’s one of Batman’s deadliest,” said writer Scott Snyder. “So as you can imagine, I’m very excited to be able to do a story that establishes him in the new DCU, with rising stars James Tynion IV and Jay Fabok. This will be tale that really digs into Freeze’s psyche, explaining his connection to the Court of Owls in the present, and exploring dark secrets about his past. Really thrilled to see what you guys think!”

The cover is drawn by Jay Fabok.