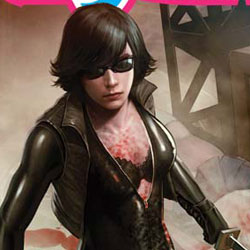 THE NINJETTES #1
32 pages FC • $3.99 • Mature
Written by AL EWING
Art by EMAN CASALLOS
Covers by JOHNNY DESJARDINS (50%), ADMIRA WIJAYA (50%)
“Virgin Art” Retailer Incentive cover by ADMIRA WIJAYA
“Black & White” Retailer Incentive cover by JOHNNY DESJARDINS
FROM THE PAGES OF GARTH ENNIS’ JENNIFER BLOOD!
Who are they? How did they come to be dead and/or decapitated? And what kind of brutal insanity is their passing about to unleash? Find out the grim connection between college student Kelly Hara and the ice-cold engine of death known as Varla as the origin of the Ninjettes is revealed! Don’t miss this ultra-violent odyssey of sin, scandal, brutality and branding!

THE BIONIC MAN #6
32 pages FC • $3.99 • Teen +
Written by KEVIN SMITH, PHIL HESTER
Art by JONATHAN LAU
Covers by ALEX ROSS (main), JONATHAN LAU (1-in-10)
“Virgin Art” Retailer incentive cover by ALEX ROSS
“Black & White” Retailer incentive cover by JONATHAN LAU
Steve Austin and the evil cyborg Hull engage in a bionic battle that shakes the very foundation of Washington DC. From the posh ballrooms of high society to the bowels of the subway, the half-machine combatants leave a path of destruction through our nation’s Capitol. But when Hull’s tactics put the lives of innocents in danger, Steve Austin must push his new bionic powers to the limit… and beyond!

WARLORD OF MARS #15
32 pages FC • $3.99 • Mature
Written by ARVID NELSON
Art by EDGAR SALAZAR
Covers by JOE JUSKO (50%), STEPHEN SADOWSKI (50%), LUCIO PARRILLO (1-in-15)
“Risqué Art” Retailer incentive cover by ALÉ GARZA
“Mars Red” Retailer incentive cover by STEPHEN SADOWSKI
The dreaded moon pirates of Mars are whisking John Carter off to a mysterious and surely unpleasant fate. Along for the ride is Phaidor, a Thern princess whose beauty is only matched by her complete lack of humanity. As far as Phaidor is concerned, all life on Mars is beneath the Therns, but she’s going to get a rude awakening about the ugly truth behind the religion she’s believed so blindly for her entire existence. Warlord of Mars #15: Issus, Goddess of Life Eternal. Hell hath no fury like a thern princess scorned!

RED SONJA #63
32 pages FC • $3.99 • Teen +
Written by ERIC TRAUTMANN • Art by WALTER GEOVANI
Covers by WALTER GEOVANI (50%), WAGNER REIS (50%)
There are countless secrets buried in the time-lost sands of Stygia, a land of dark magic and powerful gods…and it will take all of Red Sonja’s skill and daring to avoid being buried with them. The She-Devil With A Sword has faced numerous foes and bested them all, but now she faces her toughest enemy yet: the consequences of her past actions. Traveling to a hidden fortress deep in the Stygian desert, she faces a cabal of zealots and the kin of a fallen enemy. Her goal: a long-hidden weapon of terrible destructive power, which may also be the key to Red Sonja’s redemption….

ZORRO RIDES AGAIN #8 (of 12)
32 pages FC • $3.99 • Teen +
Written by MATT WAGNER
Art by JOHN K. SNYDER III
Covers by MATT WAGNER
The one and only Matt (MAGE, GRENDEL) Wagner is in the home-stretch of his epic story of Zorro! As the Los Angeles soldiers try to lure-in El Zorro for a final showdown, Zorro begins to question everything he does and everything for which he stands. There’re thrilling times ahead as ZORRO RIDES AGAIN with issue #8 from Dynamite Entertainment!

THE LIVING CORPSE: EXHUMED #6 (of 6)
32 pages FC • $3.99 • Teen +
Art and Story by KEN HAESER & BUZ HASSON
Covers by KEN HAESER & BUZ HASSON (50%),
JOSH MEDORS & KEN HAESER (50%)
This is it! The extra bloody, extra-sized 32-page pulse pounding, pants wetting finale! It’s the final showdown between THE LIVING CORPSE and his son, AGENT ROMERO! The Living Corpse and LILITH must escape the prison laboratories of Project Lazarus deep below the Pentagon. But escape is easier said than done when they have to fight their way through and army of Brainchild’s cyborg soldiers and the final revenge of Agent Romero! After this THE LIVING CORPSE’S afterlife will never be the same! A perfect jumping on point for people who like to skip to the end of the story!

DEAN KOONTZ’S NEVERMORE #6 (or 6)
32 pages FC • $3.99 • Teen +
Written by DEAN KOONTZ & KEITH CHAMPAGNE • Art by LENO CARVALHO
Cover by TYLER WALPOLE
Alone against a world of Hydra, Bobby Godric finds allies he could never have suspected. Can he save the true Earth from invasion? Will Bobby’s quest to reunite with his beloved Nora finally bring her back into his life? It’s the end of the beginning! Find out in the ultimate issue of Nevermore!

THE LONE RANGER/ZORRO: THE DEATH OF ZORRO TRADE PAPERBACK
128 pages FC • $19.99 • Teen +
Written by ANDE PARKS
Art by ESTEVE POLLS
Cover by ALEX ROSS
A LEGEND FALLS!
The legendary masked crime-fighter, Zorro, now in his sixties, has hung up his cape and sword. Living on a peaceful ranch in the new state of California, Don Diego tends to his cattle, breaks horses, and enjoys the company of his wife. When a renegade band of Confederate bushwhackers attack a nearby Indian settlement, though, Don Diego cannot just stand by and let innocents be slaughtered. Zorro heads back into action again… for the last time! Guest starring another legendary masked lawman – The Lone Ranger!

Collects the entire five-issue series by Ande Parks and Esteve Polls, along with all of the series covers by Alex Ross, Francesco Francavilla and more!