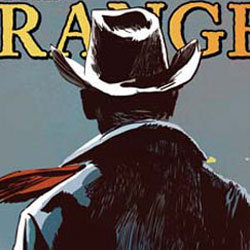 Tales of the Old West can go two ways – be totally awe inspiring or a total waste of time. In the latest outing, Dynamite Entertainment’s The Lone Ranger certainly qualifies as something awe inspiring. Previously in The Lone Ranger: The old west is a hard place to live, and a raid on a lonely farmer’s homestead proves that anyone can die before their time. But heroes need to step up and be better than the rest in this hard country.

I used to hate Westerns – HATED THEM! Then I sat though a film history class where we watched movies like The Searchers and The Good, The Bad, and The Ugly, and suddenly something clicked in my head. The big expanse of the west is enough to drive many crazy, and the lonely time is broken only with the sound of an approaching visitor, or an ill-timed gunshot. That feeling is the same today as it was one hundred years ago, and Ande Parks captures that feeling perfectly in this second issue.

This issue tells the tale of Clay Woodson, a man who became one of the roughest, toughest, rootinest tootinest lawmen of the west. He’s killed more men than he cares to remember, and sadly, he’s discovered killing is the only thing he’s good at anymore. It’s the tragic character that we’ve seen in any number of movies, and Parks brings the character to life on the page. He’s able to make the reader feel for this character at the end of his life, who has lost all hope.

And that’s the moment redemption walks in the door in the form of a masked man with a gun. The Lone Ranger once again serves as the moral compass that gives the characters that chance to change their ways, even if it means the character has to suffer a bit of tragedy. While the Lone Ranger is the central character, Parks writes him so that he isn’t hogging the limelight, and that is something we don’t see a lot in any medium.

For the second issue in a row, Parks is writing this series like he actually cares about the story and the characters, and not about a licensed property. By taking this approach, the character and the book endears itself to the audience without all the flash and in your face approach we’ve seen before.

If you haven’t heard of Esteve Polls, then you need to pick up this issue so you can become familiar with the next major comic book artist superstar. While Polls uses square and vertical panels throughout the issue, it’s his wide horizontal panels that appear at just the right moment to bring the feeling of the vast expanse of the plains of Kansas. Couple Polls art with the Francesco Francavilla’s cover and this is a book that you can’t afford to skip.

While Clay Woodson is not a real person, the approach Parks and Polls approach this issue makes it seem very real. The Lone Ranger #2 is one of the few works of fiction that actually “gets” Western Kansas – and I should know, I’ve been living here on and off for the last 20 years. Another great story, with fantastic art has skyrocketed Dynamite Entertainment’s The Lone Ranger to the top of my must buy pile, and it should be on yours, too. The Lone Ranger #2 earns 5 out of 5 Stars.