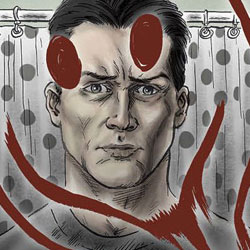 Fiorello will continue daily tweets of the dialogue until the entire first issue has been revealed. “The Phone Call” was written by Fiorello, scripted by Matt Anderson and illustrated by Bart King. It is an original story, based on real events, that follows a drunken 20-something in a journey to answer life’s most pertinent question – “What exactly happened last night?” Fiorello says the graphic novel is, at times, a dark look into who people really are when they sober up and start asking the tough questions.

“The Phone Call” is the kickoff to a stellar year of comic books and graphic novels for the Gainesville, Fla.-based record label. Fiorello, who has long expressed his love for comic books, began the label’s stint in the genre in 2011, with four different webcomic series.

“Having the ‘Paper’ side of the label is a huge priority in 2012,” Fiorello says. “We have a few books and graphic novels planned, as well as an animated series.”

“Kill The Wonderhawks,” “50 States,” “Exit Interview” and “Perfect Teeth” all saw online releases in 2011, with “Perfect Teeth” getting a limited physical treatment. A cumulative release called “Words and Panels” featured the first episodes of the other three series.

“The Phone Call” is Paper + Plastick’s latest foray into comic books, and Fiorello expresses his excitement over releasing something he wrote himself. “Having been at the lyrical helm for all of Less Than Jake’s existence, writing a complete thought with no word count in mind is refreshing,” Fiorello says from his Gainesville home. “Lyrics have a certain limitations, but for ‘The Phone Call’ and other literary projects I have going, I am assembling a complete world – not just small looks into those worlds.”