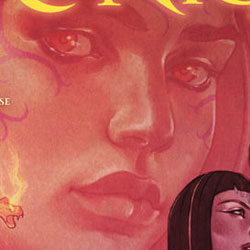 Dark Horse Comics sent Major Spoilers a sneak peek of House of Night #4 based on the novels by P.C. Cast and Kristin Cast.

Having gained a new understanding of her affinities for earth, wind, and water, Zoey Redbird moves into more dangerous territory as she attempts to master a lesson in fire. Zoey seeks guidance from the secret vampyre history of Cleopatra and her relationships with two great Roman leaders–Julius Caesar and Mark Antony.

Readers gain knowledge about Zoey’s maturation as a fledgling vamp as she becomes the leader of the Dark Daughters.

Dark Horse Comics house of night Sneak Peek
Share. Facebook Twitter Pinterest LinkedIn Tumblr Email
Previous ArticleAWESOMESAUCE: Back to the Future II made out of LEGO
Next Article MOVIES: Another pic from The Hobbit appears