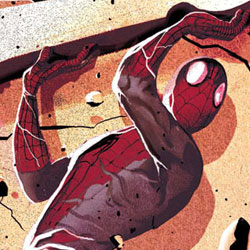 Time is running out for New York City and The Amazing Spider-Man! Will everyone’s favorite web-head save the day, or will Peter Parker disappear in a puff of time travel logic? Previously in The Amazing Spider-Man: Peter’s fellow genius and Horizon Labs co-worker, Grady Scraps built a doorway into tomorrow. Grady proved it by stepping through and grabbing the future Daily Bugle, but when Peter went through they saw New York turn into a wasteland. Armed with “Good Tuesday’s” Daily Bugle, Grady and Spider-man attempt to stop the destruction of their beloved city.

FOR THE LOVE OF TIME TRAVEL MADNESS

After the final seconds come and go from the projected destruction time, Peter realizes the frozen watch stopped at 3:10 am, not pm. Grady decides that he can’t take another twelve hours of the stress, he deems himself unimportant and will step through the future doorway to prove it. But Grady learns he is needed more than he realizes, for without him Spider-Man will die!

With the help of Silver Sable, Spider-Man stops Flag Smasher from detonating a bomb that would have destroyed most of Manhattan, but this still doesn’t change the future Grady is seeing back at the lab. The rest of the issue is spent with Spidey swinging around the city doing any superhero-like action with hopes it will change the future. As time is winding down the answer to save the future finally comes from an unexpected source, but I’m not going to tell you how; you just need to go read the issue.

Using a time travel plot device runs the risk of a story becoming wonky with loose ends, but this was straightforward and tied everything up nicely. It was also a nice touch on the last panel putting, “The End or to be continued…last issue.” Dan Slott wrote a solid script that included everything a time travel story should have: a circular ending and references to Dr. Who and Back to the Future.

A lot has been said about Humberto Ramos, which is good because he is freaking amazing, but there are still four more artists that contribute their talents to bring us a final product. As in this issue I found myself realizing how well the coloring adds to the overall tone in the book. Edgar Delgado uses a bright color palate that balances well with the wisecracking Peter Parker that Dan Slott writes. So don’t forget to give love to all of the creative team, not just the two big ones.

In every time travel story, no matter how well done, there is going to be some factor of cheesiness, in my mind at least. This holds true even with this well put together two-part story. I wouldn’t look for these two issues to have any lasting effects in the coming issues, but it was an enjoyable read nonetheless. Dan Slott and the rest of the Amazng Spider-Man team were once again on their A-game earning issue #679 4 out of 5 stars.