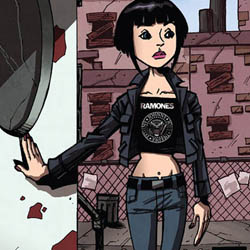 By Matthew Peterson on February 5, 2012 4 Comments

One of the most depressing things about this gig is the moment when you discover something super-awesome that you’re just sure is going to be the Next Big Thing, and nobody notices.

Mark my words:  That first part is about to happen with this book, and you’ll be sorrier than me if the second part follows… Previously, in Alpha Girl:  Back in the early 1990s, when I was a feckless college jerk (as opposed to the feckless grown-up and entrenched jerk that I am now), I had a lot of vitriol for Image Comics, or to be more precise, for the figurehead leader/creators of the company brand.  Breaking away from high-paying gigs with Marvel, the founding 7 (McFarlane, Liefeld, Larsen, Silvestri, Valentino, Lee and Portacio) struck out on their own to forge bold new ground with…  pretty much the same stuff they had been doing.  20 years down the line, things are vastly different, mind you, and I often find that the most outrageous or creatively bold choices are being made by Image.  Books like Walking Dead and Chew are doing what my youthful self hoped would happen when the boys left Marvel for self-publishing back in the day:  Telling the kind of stories we can’t get from any other publisher.  Why would I bring this up here, you ask?  Well, Faithful Spoilerite, thereupon hangs a tale…

The first thing that struck me about this issue is the wonderful cover art (though it should be noted that I’m a sucker for pretty eyes, whether real or illustrated) giving us a thumbnail sketch of the main character/narrator of our tale and really popping amidst all the full-length glamor shots that seem to be the new paradigm for cover art.  This first page is a continuation, as we see the titular Alpha Girl walking into a diner and lighting a cigarette.  The art has elements of both Paul Dini and Michael Avon Oeming, and when the voice-over narration starts, things get wild.  “My name is Judith Meyers,” she tells us, Philip-Marlowe-style, and proceeds to tell us about the end of the world.  The creators of this comic seem to be having fun, and also remember the rule that the images and words are separate and distinct, not just drawing a careful rendition of exactly what the text boxes tell us.  “[The world] ends because of a couple of @$$holes at a third-rate cosmetics company,” we are told, and the images go seriously weird, invoking a tragicomic version of the much-more-vicious end of the world revealed in ‘Crossed.’  Thankfully, the parallels don’t continue throughout the issue, but there is a clear sense that even if you’ve seen this kind of story before, you haven’t seen THIS kind of story before.

…AND THEN, THINGS GET WEIRD.

Judith’s backstory takes up a bit of the issue, and it’s a pretty seedy sort of tale involving the discovery of her OD’d mother and a series of foster families, as well as a little brother who will certainly become important again later.  Writer Roenning doesn’t repeatedly beat you to death with the heartstring-tugging, thought, which I appreciate, and transitions from Judith’s life to the story of how Revlon brought down Ragnarok on the world.  There’s a pacing issue here, as the transition between stories doesn’t quite translate for me, and Judith’s first-person narration doesn’t carry over in the the last third of the issue, as we learn just why things have gone all crapsack in Judith’s world.  There’s a little bit too much going on in this first issue (which may be a sign of exuberance from young creators, a need to get things rolling so that jaded readers will be hooked, or perhaps, more realistically, a little of both) but what is happening is compelling.  Robert Love’s art in this sequence starts to remind me of ‘Chew,’ another Image success story, and the coloring throughout the story is in the same muted sort of pastels that we’ve seen in that book.  The ending of this issue is a bit abrupt as well, leaving us on a cliffhanger as maddened women break out of the cosmetics testing lab smelling good but with intentions that are definitely BAD.

THE VERDICT: LOTS OF FUN, LOTS OF POTENTIAL.

The creators of this book have managed to do something that a lot of first issues don’t:  Imbue their creations with character and life, and even though Judith/Alpha Girl doesn’t do a lot in this issue, I was interested enough to want to read more of her story.  The fact that the end of the world is played with sardonic humor appeals to me, as does the deceptively simple art style.  Alpha Girl #1 is a fun start to what could be a very interesting story, and even with a few disjointed transitions, tells the beginning of a story that I want to hear more of, earning 4 out of 5 stars overall for clear storytelling and striking character design.  I’m liking what this seems to want to become, and will be back next issue for more…