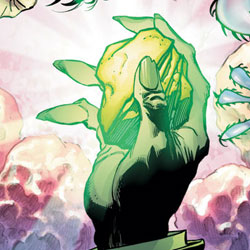 Grant Morrison has given us his interpretation of the Golden Age Superman, but what happens when he takes on the Silver Age? Previously in Action Comics: Having seen his city shrunk by the Collector A.I., Superman has one mission on his mind – get Metropolis back. But then the time travel kicks in and we’re treated to a visit from the Legion of Super-Heroes

TIME TRAVEL TO THE SILVER AGE

If everything before this issue was a look at Superman from a Golden Age perspective, this issue is truly a look at Superman in the Silver Age. Not only do the Legion of Super-Heroes appear to help save young Superman, and thus old Superman from certain destruction, but giant space slugs, time travel, and a battle inside Superman’s head plays out in the way only  Grant Morrison could do it, and make it work.

The last issue focused on the rocket that brought Kal-El to Earth, and this issue continues to ignore the Bottled City of Metropolis storyline, instead focusing on Superman and the Legion of Super-Heroes from the far future coming back in time to find the rocket’s stolen Kryptonite power drive, and put a bunch of bad guys away. It’s not a huge problem that the story has diverted, though one could argue that the story is playing out in the correct order, we’re just seeing certain slices of it. Yeah, it’s time travel, one of the many tropes of the Silver Age. It’s interesting to see it all work out in the end, even if it means Superman has to have a brain hemorrhage from all the fighting and K-radiation released inside his skull.  How the events in this book will play out in the future (or is it the past) is beyond me at this point.

Andy Kubert delivers up another spectacular issue when it comes to the art and layout of the page. Seeing an army of villains arguing over who is going to get a sliver of Kryptonite for their nefarious purposes, and then have a battle break out is pretty cool. Likewise, seeing both the future Legion of Super-Heroes juxtaposed with the first meeting of the LoSH and young Clark Kent gives the artist a chance to keep the characters looking alike, but aging them – something that is difficult to do for many artists.

While I really want to see how the Bottle City of Metropolis storyline plays out, I’m okay with taking this break in the story to see more of the revised history of Superman. The story is a bit of a head trip (literally), and the art is nice to look at, but I get the feeling Morrison is beginning to venture out into deeper waters that may turn off fans of the series. Overall, Action Comics #6 is an enjoyable read and earns 4 out of 5 Stars.