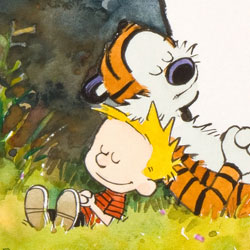 “Beyond the Peanuts comic strips of legendary cartoonist Charles Schulz, there is no more popular comic strip and certainly no strip where the original art is more in demand,” said Todd Hignite, Vice President of Heritage Auctions. “The difference being that original Schulz work can be had at a variety of price points. Original Calvin and Hobbes artwork has, simply, never come up for public auction. There’s really no telling how high collectors will be willing to go on this one.”

Bill Watterson wrote and drew Calvin and Hobbes from 1985 to 1995 making the adventures of Calvin, a hyperactive little boy and his stuffed tiger and best friend, Hobbes, de rigueur reading for a generation of readers and now, subsequently, their children. The comic waxed from the poetic to the philosophical to the broadly comical, and never failed to deliver as it became one of the most important comic strips ever written.

Then, inexplicably, at the peak of the strip’s popularity in 1995, Watterson called it quits, shuttering the adventures of the pair and breaking the hearts of millions of readers by publically stating he had achieved all he could with his beloved cast of characters. Unlike so many cartoonists, however, Watterson never sold any of his artwork, and rarely gave away any as gifts or in trade.

“It’s hard to state exactly how desirable this gorgeous piece of art is to collectors of all sorts, not just those interested in comic art,” said Hignite. “This one has it all, truly. It shows Calvin & Hobbes in a rare moment of total peace and repose – it is the philosophical heart and soul of that great comic – and now one lucky and determined collector is about to realize a dream held dear by many hardcore collectors and non-collectors alike.”

Watterson is one of the few cartoonists to have shunned the merchandising bonanza of a popular character and is widely known to be a very private person. Only a very small handful of originals have ever come onto the market, and none of them has ever been published, let alone so iconic. Nothing comparable by one of the most popular cartoonists of all time has ever been made available to collectors. The image area of this ink and watercolor masterwork is in pristine condition.

“You can look as closely at this as you want and I will still defy you to find a flaw in it,” said Hignite. “It’s in as pristine condition today as the day it was painted – there is absolutely no fading or discoloration of any kind.” This piece has a special provenance as it was in the collection of one of the American comic strips’ most important historians and feature writers, Rick Marschall, known as the ‘komic connoisseur,’ to whom it is inscribed in the lower right corner from Watterson himself.