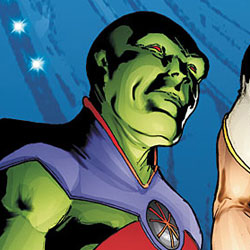 By Stephen Schleicher on February 1, 2012 0 Comments

The creative team announcements continue to roll out of DC Comics, which seems to be a way the company is keeping things relatively fresh for new readers.  With Jeff Lemire moving to Justice League Dark, where does that leave Peter Milligan?

The move hapeens with issue #9 that arrives in May, but don’t worry the scribe will continue to work on Red Lanterns and Hellblazer.

“Stormwatch has the craziness, the paranoia and the occasional bursts of odd humor that really grab me. This is my kind of book. In other words, when I re-read Paul Cornell’s excellent first series with a view to taking over the writing duties I was really excited. And I’m excited too by what I have planned, from Stormwatch facing a ferocious character from the Red Lantern Corps, to hidden secrets being revealed about the origin of Stormwatch, and some shocking revelations about the mysterious Shadow Lords. It’s going to be a very intense ride.

DC is certainly keeping readers on their toes, and each announcement that is being made, even if hardcore fans don’t like them, are keeping the publisher in the spotlight.