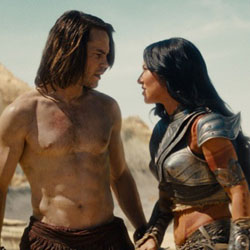 During the Super Bowl be on the look out for the John Carter movie trailer, that includes information on how viewers can win tickets to Super Bowl XLVII.

Or you could watch the spot right here.

Disney announced today that they have collaborated with the NFL to give viewers anopportunity to enter The Journey to the Super Bowl Sweepstakes with an ad that will run during the Super Bowl XLVI broadcast on Sunday, February 5, 2012.  The Grand Prize winner will receive a trip for two to Super Bowl XLVII in 2013 in New Orleans.

Viewers who are interested in entering the sweepstakes should tune into the game and watch for the “John Carter” commercial. During the airing of the 30-second spot, a code will be revealed. Viewers can then go to NFL.com/JohnCarter and input the code to be entered in the sweepstakes.

The Grand Prize is a trip for two to Super Bowl XLVII on February 3, 2013 in New Orleans, La. The trip includes a 5-day/4-night trip for the winner and guest to attend the game, two tickets to Super Bowl XLVII and access to Game Day hospitality at the stadium. For more information on the sweepstakes and for the official rules, visit NFL.com/JohnCarter.

“John Carter” is a sweeping action-adventure set on the mysterious and exotic planet of Barsoom (Mars) and  is based on a classic novel byEdgar Rice Burroughs, whose highly imaginative adventures served as inspiration for many filmmakers, both past and present. The film, directed by Academy Award®–winning filmmaker Andrew Stanton, tells the story of war-weary, former military captain John Carter (Taylor Kitsch), who is inexplicably transported to Mars where he becomes reluctantly embroiled in a conflict of epic proportions amongst the inhabitants of the planet, including Tars Tarkas (Willem Dafoe) and the captivating Princess Dejah Thoris (Lynn Collins). In a world on the brink of collapse, Carter rediscovers his humanity when he realizes that the survival of Barsoom and its people rests in his hands.

Disneypresents “John Carter,” with Jim Morris, Colin Wilson and Lindsey Collins producing, and screenplay by Andrew Stanton & Mark Andrews and Michael Chabon, based on the story “A Princess of Mars,” by Edgar Rice Burroughs. “John Carter” is slated for a March 9,  2012 release.

For more information about the movie visit the official Website: disney.com/johncarter.