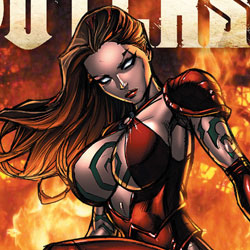 BOOM! Studios sent Major Spoilers a sneak peek of titles arriving in stores on February 01, 2012. Take the jump for an early look at Valen: The Outcast #3, Betrayal of the Planet of the Apes #4, and Hellraiser #10.

Hot on the heels of BOOM!’s sold-out, bestselling PLANET OF THE APES ongoing series comes a brand new four issue mini co-written and drawn by Gabriel Hardman. Best known for his series-defining work on HULK and AGENTS OF ATLAS and his storyboard work on such hit films as Christopher Nolan’s INCEPTION, Hardman and writer Corinna Sara Bechko (HEATHENTOWN, FEAR ITSELF: THE HOME FRONT) bring you BETRAYAL OF THE PLANET OF THE APES! Taking place during the continuity of the original, seminal fan-favorite film! Now on the run, the feared and respected General Aleron must find the one ally in Ape government that can stem the tide of carnage about to crest — for human and ape alike! The conclusion to the not-to-be-missed mini-series with story and art that is sure to make you go…ape!

Witness Clive Barker’s long-awaited return to tell new chapters in the series’ official continuity—a trajectory that will forever change the Cenobites…and Pinhead! In this issue…the startling new chapter in the Hellraiser mythos continues! The whole game has changed…and there can only be one victor! Clive Barker’s new take on Hell and the Cenobites continues here, delivering scares like the one and only horror legend can! This is required reading for Barker fans!

Clive Barker’s visceral visions take form in the next installment of the ongoing “Devil’s Brigade” epic. D.G. Chichester and Dwayne McDuffie team up with Denys Cowan for “Passion,” while Nicholas Vince and Joe Barruso bring you the terrifying “One True Faith.” No other brand of horror hooks you like Hellraiser!

The King is dead — long live the DEAD KING! King Valen Brand was a just ruler and a great warrior until he was killed in battle by the necromancer Korrus Null and resurrected as one of the walking dead. Now he’s considered an abomination in his own realm, an outcast with only one purpose: to restore his lost soul… Valen has slaughtered his former allies, assembled a ragtag band of renegades and smugglers, and cut a path through his war-torn kingdom as a dozen armies vie for his old throne. But when Korrus Null’s right-hand man finally catches up with him, will Valen fall back under the Necromancer’s wicked control? From the mind of fan-favorite creator Michael Alan Nelson (28 DAYS LATER, ROBERT E. HOWARD’S HAWKS OF OUTREMER) and DEADPOOL artist Matteo Scalera comes OUTCAST, a visceral new ongoing series that’s perfect for fans of Game of Thrones and Conan!

Everyone’s favorite sub-zero heroes are back you won’t want to miss this. ICE AGE: ICED IN reunites prehistoric friends Manny the wooly mammoth, Sid the sloth, Diego the smilodon, Scrat the “saber-toothed” squirrel, and the rest of your Paleolithic pals in one big unforgettable icecapade. Venture out into the wild and pick up the only comic that gives you a license to chill!