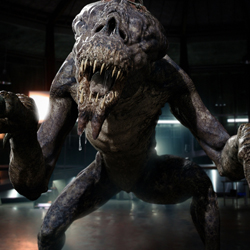 FROM THE VAULT: Primeval Volume 3 on Blu-Ray

Yes, the BBCs time-traveling dinosaur show is back! Now with MORE TIME-TRAVELING DINOSAURS! But wait, what happened to all the characters who got stranded in the cretaceous last season? Could they have been eaten by… time traveling dinosaurs…? I should briefly point out that Primeval Volume 3 is technically two seasons. Series 4 and 5. So if you were looking for season 4 it’s here and you can own it today on blu-ray.

If you’ve been following Primeval since the beginning you may have been thrown off by the fact that, between seasons 2 and 3 they killed the main character and, rather than promote one of the other protagonist-types they just introduced a NEW main character. Well, this season they pretty much did it again. A brief recap of the show at the beginning brings you up to speed, along with a quick “A new team was assembled.” showing you a brief shot of the new characters. And we’re off to fight dinosaurs.

Meanwhile some of the time-stranded protagonists make their way back. It is through these characters, who have been gone a year, San Dimas Style, that we learn of the changes that have been made to the ARC. Some are for the better, and some are for the insidious plot device…

One thing the time jump really helps with is taking characters who we know from previous seasons and putting them next to the characters who came in to replace them. This means that both sets of characters now have equivalent tenure on the team. This creates a tense dynamic that moves the show’s drama forward.

One other aspect that this season really hits on is humans time traveling. In previous shows we’ve seen lots of therapods, arthropods and the odd cephalopod come through the anomaly, but this season brings us a handful of human anomaly-riders. Some of which prove to be just as deadly as any sauropod.

Of course the biggest draw of the show is watching dinosaurs, prehistoric mammals and the odd giant insect tear up the city. Strangely though, this season’s plot was a bit more complex, which meant that your once-per-episode gastropod attack was often an unwelcome distraction from a relatively interesting plot.

Much like the previous seasons Primeval volume 3 is full of pop science, loose writing and a truckload of new characters. That said it’s also full of action, dinosaurs and it furthers some of the relationships we had started to see in previous episodes. In the end, it is an above-average effort and earns a full 3.5 stars from me. If you liked previous seasons you’ll enjoy this one, but if you liked particular characters you may want to read the wiki to see who’s still around.