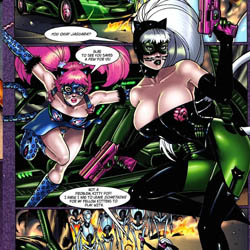 Or – “Well, At Least Their Nethers Aren’t Haunted…”

A recent discussion with Weekend Guy Chris at Gatekeeper Hobbies (Huntoon & Gage, Topeka!  Ask me about our New 52 first printings!) led to a strange exposition of a previous issue of Tarot: Witch Of The Black Rose, a title which I had never actually experienced. In the interest of seeing if the grass is really greener on the other side of the fence, I grabbed the latest issue in my regular stack of books this week. Previously, in Tarot – Witch Of The Black Rose:  Tarot is a practitioner of magic, a sword-priestess, and protector of the innocent who works to create a “safe haven in the world of man” for beings of mystic origin, most of which are marginalized due to our increasingly mechanized and dehumanizing world.  Her origin bears elements of Wonder Woman, Xena, and a hint of Doctor Strange, all wrapped up in a noticeably buxom package.  This, apparently, is NOT her story…

So.  Let’s get the first question out of the way:  Yes, there’s nudity.  On the first page.  Tarot (based on the writer’s wife, who is also the colorist/letterer) has come to visit her…  boyfriend?  Let’s go with boyfriend (who is based on Jim Balent himself).  She is oh-so-very nekkid, and lying across his bed in a manner so as to display that fact.  The framing sequence of this issue is interesting, as well, as Tarot tells him she’s going to lie there and read his comics, while he watches.  We then cut to the story she’s reading, and the issue is revealed to be a tale of the 3 Little Kittens, another BroadSword property from the early 1990s.  The art is lush and incredibly vivid (especially the hyper-saturated neon coloring, which really makes this stand apart from nearly anything else I’ve read recently) and the character work, both in design and in body language, is pretty amazing work overall.  It’s a shame, then, that the dialogue and caption-work feels so pedestrian.  The story opens with a television interview wherein the interviewer asks ridiculously sycophantic questions and doesn’t follow up on anything, allowing the subject (whose name is “Gun Cat”) to smugly takes shots at the network.  There is some vague plot discussion about rainbow alien UFO’s, which leads to Gun Cat strapping on a jetpack and leaping into action, calling upon her team to assemble!  (“To me, my XXX-MEN!”)

NOT SUITABLE FOR READERS UNDER 18 YEARS OF AGE.

We’ve all seen the “superhero suiting up” moment a thousand times, but Balent lovingly renders the 3 Little Kittens most private areas in graphic detail, with legs, breasts and vulvas close-up before our heroes (Jaguara!  Catress!  Kitty Pop!) rush out to fight off the alien invasion.  But first, they’re gonna have to fight off TSA flight safety robots!  Again the storytelling of the art is let down by the writing, as whatever the aliens are doing frees a carload of malfunctioning automatons who only want to safeguard our airlines.  There’s some mighty ham-fisted social commentary going on as the robots terrorize private citizens and their civil liberties, but it’s pretty much sidelined by the fighty-fighty.  There’s also much distraction to the fact that Jaguara’s costume includes no covering whatsoever for her chest, other than something that is either a tattoo or bodypaint over each nipple.  (She also crashes through a wall, causing her thong bottom to do what thong bottoms do, once again exposing her genitalia.)  Things awkwardly transition back to Tarot and Jim as his electricity suddenly goes out (whether this is expected or somehow plot-related is not explained), causing them to climb out the window naked and get more intimate as several mysterious topless female creatures watch from the foliage…  The most fun part of the issue for me is the last several pages, which include a letters page, reader-submitted spells for those who practice Wicca (I believe that’s the term, anyway) and photos of the creative team’s Halloween celebration.

THE VERDICT: INTERESTING, ALBEIT SOMEWHAT SPECIALIZED…

I’ll be honest:  Part of me expected to point and laugh at this issue, based mostly on the stories about issue #53 (containing that immortal line, “You have to get out of here!  Your vagina is haunted!”)  That didn’t happen, although I was disappointed with the expositionary language throughout the entire sequence involving Gun Cat, as the whole story came across as very pleasant and approachable.  There’s a friendliness to this issue, a tone that seems to say “Hey, come enjoy our cool comic!  Would you like to see Jaguara’s inner thighs?”  The art and coloring are pretty phenomenal, even with the fan-service, and the reader submissions make it clear that Tarot’s fans are a creative and loyal bunch, all of which combine to defang any snark that I might have felt.  And just to undermine how condescending that might all sound, this book has gone one for TWELVE YEARS, and still costs less than the much-vaunted DC $2.99.  Tarot: Witch Of The Black Rose #72 isn’t a perfect issue (and honestly, isn’t really a Tarot issue at all) but has charms that help to ameliorate some dialgoue and fanservice issues, earning a pleasantly surprised 3 out of 5 stars overall.  Just make sure you’re legal and that you aren’t going to be shocked by the sight of full-frontal female nudity before you pick it up…

Faithful Spoilerite Question Of The Day:  Given the amount of fabric in most superhero costumes, isn’t it unrealistic how FEW wardrobe malfunctions superhumans endure?