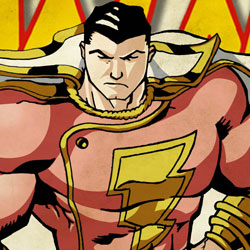 Goeff Johns is currently writing The Curse of Shazam! that will appear as a back-up story in Justice League, and that is where we’ll see the name change.

Well, there are a lot of reasons for the change. One is that everybody thinks he’s called Shazam already, outside of comics. It’s also, for all sorts of reasons, calling him Shazam just made sense for us. And, you know, every comic book he’s in right now has Shazam on the cover. So I think just by embracing that and calling him Shazam.

Of course there are lots of reasons… a lot of little green reasons with dollar signs on them that prompted the change.

Because Marvel Comics trademarked their Captain Marvel comics during the period Fawcett Comics wasn’t telling stories, and before DC sued the pants of Fawcett for copyright infringement, DC was prevented from marketing Captain Marvel books as anything but Shazam! (or Power of Shazam! etc.).

Johns is right though, most everyone I have talked to think Captain Marvel’s name is Shazam, and this name change will prevent another awkward conversation with my four year old on why his name is really Captain Marvel. And as an added bonus, Matthew and I can get at least five more years out of our running gag by no simply changing the name anytime we write a Captain Marvel (not THAT Captain Marvel) review.

FAITHFUL SPOILERITE QUESTION OF THE DAY:  Did DC do the right thing by changing Captain Marvel’s name to Shazam! or is this just another change that will have you prematurely spinning in your grave?