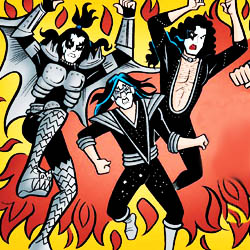 There’s something awesome and iconic about the world of Riverdale and Archie Comics.  They’ve successfully persevered through nearly eight decades of progress, changing with the times while maintaining the core of their portrayals.  I’m just worried that The Demon is going to steal BOTH Betty and ‘Ronnie from Arch.

(Hey, if anybody can do it, Gene Simmons can…  Just ask Lois Griffin.) Previously, in Archie:  There have been a lot of strange folks moving through Riverdale in the last seventy-odd years.  The Punisher…  The Tiny Titans…  Ms. Grundy.  On the eve of Halloween, one of Sabrina’s spells has gone wrong (thanks to that b!+c# Veronica), opening a wormhole that let strange monsters in to terrorize the town.  Thankfully, the vortex also let through a quartet of protectors in the form of the The Demon, The Starchild, The Beast-King and The Celestial, who will conquer the wave of mutilation with the power… of ROCK!  But what happens when Mister Weatherbee meets Doctor Love?

NO ONE CAN DESTROY THE METAL…

This issue doesn’t waste time with long plot summaries, throwing us right into the midst of things with a quick introduction (very cute and well-done) by Sabrina the Teenage Witch.  Archibald Andrews himself has become the latest victim of the strange zombie-plague, but Sabrina arrives with reinforcements just in time to turn the tide.  Seeing the members of KISS rendered in the inimitable Archie style is somehow delicious, as what could have (maybe even SHOULD have) been a style-clash turns into a wonderful union of things that shouldn’t really work together.  The Macguffin is brilliant in execution as well, as the magical talisman that has been affecting Riverdale is designed to drain worlds of their “fun,” leaving only lameness behind.  Archie is barely brought back from the edge, and worries that he’ll be lame forever, allowing Jughead the single line zinger of 2012:  “Let’s just work on the problems we CAN solve.”  HA!  Forsythe wins one (1) internet.  Of course, this is followed by a wonderful sequence in which the Archies see what horrible fate might await them:  The real world, complete with people staring vacantly at cell-phones and iPads without even seeing one another.  Heh…

THE METAL WILL STRIKE YOU DOWN WITH A VICIOUS BLOW!

If you’ve ever thought that Archie comics don’t have any internal conflict or drama, you’ll be surprised by this issue, as Reggie and Veronica apparently didn’t have any interest in saving the day or working with Sabrina, and have been left behind at school.  (And have you ever noticed that, even though it has a female Archie-character at it’s center, ‘Glee’ has pretty much stolen Reg and Ronnie whole-cloth and called them Puck and Santana?  Curious…)  Our ebon-haired duo ends up facing down the villainous monsters, revealed to be hipster versions of Frankenstein, Wolfman, and a bubble-headed mummy, as well as a vampire clearly designed to rhyme with ‘Fredward Mullin.’  Heh.  This book really is a riot, and the facial expressions on the emo vampire teen crack me up.  “Sometimes I feel like escaping, too,” he mopes as Reggie and Miss Lodge make a break for it.  The issue ends with a surprise, undermining one of the oldest story-telling cliches in the book with both joy and style, and setting up for next issue’s big climactic story.

THE VERDICT: I DIG THIS…

I have always been a sucker for meta storytelling, so it’s no surprise that I’m marking out for this story arc.  There are references in this story to all sorts of media, including Monster Squad and Sabrina’s various appearances on TV and in comics, and even a shot at our self-absorbed Facebooking “real world” mentalities.  The story hinges on Sabrina, long set up as an element of Riverdale’s world, making the stretch to superheroic guys in studs and leather less tortured, but the real joy is how easy it is to accept that KISS are really guys with powers who protect the world with the power of crunchy bass lines.  This is a fun story about how stories are no fun anymore, leading to the awesome realization that, by reading the thing, you’re actually part of the solution!  (Let’s all clap for Tinkerbell…  Errr, Peter Criss.)  Archie #629 is slam-bang fun that seems to effortlessly leap all the hurdles to an awesome story (including a priceless moment where Kevin Keller pulls off a Big Damn Heroes moment armed only with a boombox) earning a dead-solid 5 out of 5 stars overall.