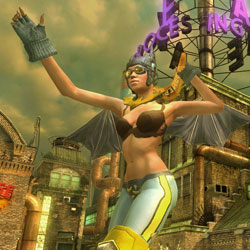 Warner Bros. Interactive has released a brand new trailer for the upcoming Gotham City Imposters game, and the company has released word on the new public beta.

Those interested in joining the Xbox 360 version of the beta can go to https://www.gothamcityimpostors.com/beta/ to register for a chance to receive a key. The PS3 version is available in the PSN and can be downloaded without a key.

Gotham City Impostors is a download only title that will be available in the Xbox LIVE® Marketplace for the Xbox 360® video game and entertainment system from Microsoft, PlayStation®Network and Windows PC. Fans of the game can go to www.GothamCityImpostors.com for the latest updates and news.

Gotham City Impostors is an original first-person shooter where up to 12 players battle for control of an unhinged Gotham City overrun by impostors inspired by the DC Comics characters Batman and The Joker. Players can engage in deliriously fast paced, uniquely vertical, completely unconventional urban warfare to level up and unlock a mind-boggling array of customization options that let them personalize their Batz or Jokerz Impostor with insane costumes and a huge assortment of traditional and homebrew weaponry, equipment, and perks. Gadgets such as the Glider Rig, Grappling Hook, and Spring Boots give gamers unprecedented mobility options, while support items like bear traps, boomerangs, and body armor open up crazy new tactical options. The game will feature maps and modes inspired by DC Comics’ Batman license.