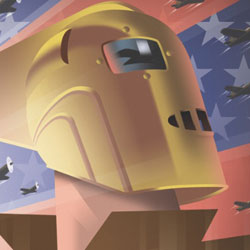 “The Rocketeer takes us back to another time,” said series editor Scott Dunbier, “one stuffed to the brim with heroism and thrilling adventures. Some might call these stories old-fashioned—and what’s wrong with that?”

As with the first series, a portion of the profits from Rocketeer Adventures will be donated to the Hairy Cell Leukemia research. Dave Stevens, the creator of The Rocketeer, died of the disease in 2008 at the age of 52.