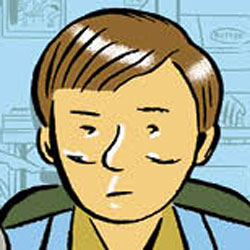 In his first full length graphic novel, Tammaso tells the story of Pete and Miriam, the title characters, in a complicated relationship as best friends growing up in New Jersey in the 1970s: Mischief Night, schoolyard fights, parents, washed-up film directors, and a roomful of ex-girlfriends. The mundane and the unpredictable collide as Pete and Miriam forge their friendship through the odyssey of coming of age in America.

“It’s a timeless story. We all struggle with identity and the mystery of being an adult when we grow up,” said BOOM! Studios Editor-in-Chief Matt Gagnon. “Tammaso brings a lucidity to this slice-of-life that reflects why he’s already and Eisner Award-winner.” The PETE AND MIRIAM graphic novel by writer and artist Rich Tommaso will ship in March with 112 pages of black and white art for $14.99.