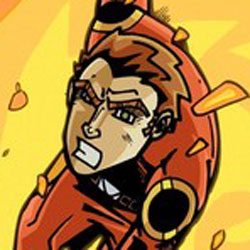 Earthbound Comics has released a sneak peek of the upcoming first issue of Red Hot by Mike Luoma, that you can check out, after the jump.

RED HOT #1
Writer: Mike Luoma
Artist: Rhys ap Gwyn
Red Hot is a third-generation super hero – at least he’s trying to be a hero. He’s been following tips,  stopping robberies and other criminal activity as he tries to make a name for himself. If he can prove he’s a real hero, he may be invited to join The Team – the group of powered humans who work for good in tandem with governments around the globe.