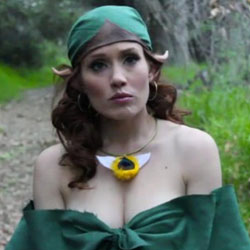 Warner Bros. has put the final nail in the coffin for a studio produced movie. For several years now, fans have been working on teaser trailers and short bits from what a movie would look like, but it looks like all that work is for naught.

The official Elfquest Facebook page broke it all down for fans:

“After close to four years of suspense – and longer than four years of your much-appreciated interest and support – the word has come down from Warner Bros. And the word is “no.” Their simple explanation is that they don’t want to compete with “The Hobbit.” This was a possibility, among several, that we were prepared for. It is a relief, at last, to know.

So…where that leaves us is that Wendy has done all she can, for three decades, with regard to an Elfquest movie. There is nothing more she can do or wants to do. As for Richard, he will continue to manage Warp Graphics’ properties and pursue publishing and licensing opportunities.

Thank you so much for all your love and encouragement. Believe us, it has not fallen on bare rock. We will spend the next few years producing Elfquest “The Final Quest.” Then, who knows? Our capacity for dreaming big has not diminished.

Here’s the fan film that made its round last year.