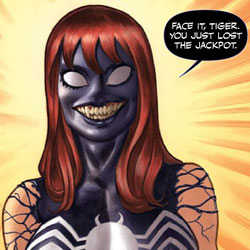 What would happen if Spider-Man was out of time for 24 hours? The rest of New York would be out of time, that’s for sure. Previously in The Amazing Spider-Man: Having gotten his life in order, Peter Parker has landed a sweet job at Horizon Labs. Unfortunately, his girlfriend discovered he was Spider-Man and dumped him, the city of New York had a really bad spider infestation, and he lost any chance with Felicia Hardy when she and Matt Murdock decided to get it on. At least he still has his day job.

Here’s a mind trip for you; Grady Scraps, a Horizon Labs co-worker, has invented a doorway to the future. A portal that will allow the person walking through to travel to the Horizon Labs cafeteria from 24 hours in the future. Unfortunately, when Peter Parker steps through, even for a moment, he disappears from the Marvel timeline for a full 24 hours, and when he steps back to present time, the future changes. And what a change it is. New York needs Spider-Man so much that when the duo look back through the door, the only thing they can see is mass destruction for as far as the eye can see.

Grady and Peter know when the bomb goes off, and they have less than a day to prevent whatever happens from happening. Fortunately, they have a newspaper from the future that can serve as a guide, and it is up to Spider-Man and Grady to get to the bottom of it all.

Really good time travel stories have a lot of wiz-bang-pow that make reading the story fun to follow. Dan Slott does serve up an entertaining first chapter in this end of the world scenario, but though we know Spider-man will save the day, unless a whole new universe is created, I’m pretty sure we aren’t going to see any long lasting repercussions from this event. It’s a good story, but i don’t think we’re going to see Peter making out with a family member, or teaching the kids of the future about rock music.

Have I told you before that I love Humberto Ramos art? No? Well, I really love Humberto Ramos art. Though his body proportions are skewed from the norm, every panel is brought to life in stunning detail. Though the destruction seen in the future that might be is interesting (as far as wastelands go), it’s the opening pages featuring Peter Parker walking through New York City that blow the mind. So much detail, so many people, so much wonderfulness in this 20=page story.

Though it isn’t part of a huge story arc, I really enjoyed reading this issue of The Amazing Spider-Man. The set up is nice, and the repercussions are fairly serious, but again, we know New York isn’t going to blow up – especially with the Avengers vs. X-Men event on the way, and Avengers and Spider-Man movies on the way in the near future. It’s a good fun story that becomes even more enjoyable to read with Ramos behind the pen. I’m still riding high on my transition to Spider-Man, and The Amazing Spider-Man #678 earns 4 out of 5 Stars.