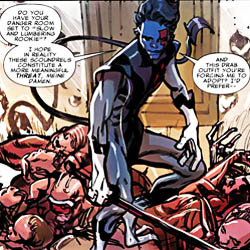 Or – “The Alternate Universes Team…”

Over the last few issues, X-Force has been dealing with issues in the reality known as the Age of Apocalypse.  Now that they’ve $&@ed that reality up as much as they can, it’s on to Otherworld! Previously, in Uncanny X-Force:  The X-Men have all had their hard times, like Dusty Rhodes before them, but the current iteration of X-Force comprises many of the most “bruised” characters in the mutant roster, including Wolverine, Deadpool, Psylocke, and Fantomex.  Their roster used to include Warren Worthington, aka Archangel, until the Apocalypse Seed that was driving him mad finished the trip.  Warren’s madness led to an all-out dimensional war, culminating in the undoing of Warren and the Age of Apocalypse (although the jury is out on both.)  The X-Force squad also recruited the AoA version of Nightcrawler into their ranks, returning home just in time for Fantomex to be taken into custody by the other-dimensional Captain Britain Corps, led by Psylocke’s big brother Brion Braddock.

THE BATTLE FOR THE OTHERWORLD…

Rick Remender knows how to create a cliff-hanger, sure, but what’s more impressive is how he resolves them.  After last issue’s kidnapping of Psylocke and Fantomex, we open with Psylocke awakening to her brother’s warning:  “Don’t overreact.”  Let’s see, she’s been accosted in her sleep and dragged out of her reality by her brother, recently re-empowered as an omniversal protector.  Moreover, their older brother Jamie Braddock is likewise no longer dead, and both her siblings have a proposition:  Return to the Corps and save Otherworld.  Back on our Earth, Wolverine delivers the single best line in recent memory, in regards to Mystique and Sabretooth:  “I tend to kill ’em on sight,” he grunts, “They tend t’ come back a few months later.”  Heh.  Turns out he’s helping alternative-Nightcrawler to acclimate to their new reality, a sequence which also highlights Deadpool’s extreme distaste for the teleporting mutant.  Greg Tocchini’s art throughout this segment is spot on, even managing to give clear facial expressions to Deadpool and Wolverine while wearing their masks, no mean feat.

Back in the otherworld, a mess of familiar faces (to those who’ve read Alan Moore’s run on Captain Britain, anyway) await Fantomex, as he is brought to trial by Saturnyne for his murder of a young clone of Apocalypse earlier in this X-Force run.  Fantomex has the driest wit of all the heroes (in a previous issue, when a possessed Psylocke returned to her Lady Mandarin togs, complete with Jim Lee thong, claiming to be in the service of the celestials, he remarked “Who knew the celestials uniform tastes ran so assy?”) and his interactions with the kangaroo court are ridiculously fun to watch.  An interesting fact is brought up during his ever-so-short trial, as Captain Britain explains that Fantomex is an anomaly in the multiverse, a man with no parallels.  The rest of the issue runs quickly, as Wolverine and the rest of X-Force teleport to Otherworld to find their comrades, Deadpool gets his head cut off, Fantomex is marched off to be annihilated, and Psylocke returns to her stylish Alan-David-created Captain Britain costume from the 80s as an imaginary ominous tune plays in my head…

I’ve been hearing very good things about the recent ‘Dark Archangel Saga’ in this title, and found that this issue was a nice jumping-on point, not too engrossed in an arc, but obviously a story with something to say.  The use of Wolverine and Deadpool here is very well-handled, and I have to say that I had forgotten how much I like see Nightcrawler in action.  The use of the Captain Britain Corps ties in to the excellent stories that first gave us Psylocke, back before she was Asian or a ninja, and I’m wondering if we’re going to get the full story on what happened between the end of ‘Captain Britain And MI:13’ and this book.  Overall, Uncanny X-Force #20 hits a lot of strong notes and impresses me across the board, earning 4 out of 5 stars overall.

Faithful Spoilerite Question Of The Day:  Have you ever avoided a book with good reviews because of the characters that appear in it?