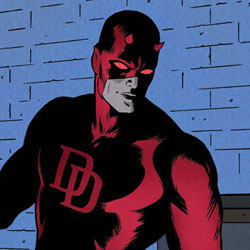 Spider-Man and Daredevil are teaming up! At least they’re not beating the crap out of one another… but then again, it isn’t April, yet. DEVIL AND THE DETAILS

For a two part crossover, I kind of expected a little more bang and zoom from the dynamic duo of DD and SP. Trapped underground, it takes the amazingly bad luck of Black Cat to keep them from getting fried. Though Felicia Hardy thinks her law enforcement woes are the result of Spider-Man’s amorous feelings toward her. Turns out she was set-up, and the trio quickly discover that the Horizon Labs theft was indeed an inside job, as villain group, after villain group is doing everything they can to out-tech one another in the coming global super villain mega-event, which has yet to be announced.

Waid does a good job of wrapping up the heist story that is really nothing more than that on the surface, but he does an excellent job of using the two titles involved in this crossover to create a romance between Black Cat and Daredevil, and the reaction (This is my super villain origin moment) from Spider-Man. It will be interesting if Dan Slott is able to continue this character moment in future issues of the Spider-Man series, or even if Black Cat will stick around for a while in Daredevil. I guess this is really one of those wait and see kind of things.

The only thing that would have been great in this two-part story is if the artist would have been the same for both, but considering artists change so much these days as deadlines and company pressures to deliver quality issues, I’m pretty much okay with this. Kano does a great job of keeping a Ditko feel with Spider-Man that each time he appears on panel, I found myself studying the pose, placement, and details added by Kano and colorist Javier Rodriguez.

If you picked up Amazing Spider-Man #677, then you absolutely need to buy this issue to see how the entire things ends. I like Waid’s ability to take each issue of the crossover to focus on that titles main character, without making the story seem like it is only half finished. Kano’s art shines on every page, and one could (though I wouldn’t recommend it) disregard the word balloons and let the art tell the story itself. Daredevil #8 is worth picking up and earns 4 out of 5 Stars.