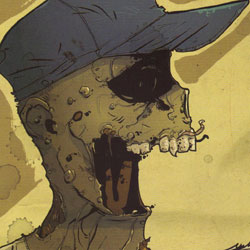 Tony Chu has been kidnapped for sex, and is being forced to use his gift in a new way. Meanwhile, Agent Colby has his own set of problems dealing with his new partner and the rest of the USDA. Previously in Chew: Savoy has taken Tony’s daughter, Olive, captive and is attempting to learn what food-based power she possesses. Tony has also been kidnapped and we received a short glimpse into what Tony’s captives have planned for him, shedding some light on the title of “Major League Chew”

LIONS, BLOOD, AND FEET. OH MY!

Going into reading Chew you have to expect to see and read things that you haven’t anywhere else. Having read every issue so far I have become acclimated to the level of crazy the book gets to, but this issue still caught me off guard.

We start out in the USDA with the recently transferred Agent Colby, with his feline partner Buttercup. It looks like Colby has become the Chu of the USDA with an over-bearing boss and coworkers that despise him. Even after he and Buttercup successfully bust a money-counterfeiting operation Colby still can’t win the favor of Director Pena, that is until he puts on the moves he used on Director Applebee.

In what felt like the side story to the woes of Agent Colby, we return to Tony who is being held captive by Amanda’s ex-boyfriend Dan. Dan has plans for Tony that I honestly never saw coming. Instead of using Tony’s powers to learn the secrets to baseball greatness, Dan wants Tony to tell him all about the sexual exploits of legends past. So Tony eats decomposing body parts and then spews out the juicy secrets for Dan’s tell-all book. But that’s what great about Chew; you just keep laughing while the sick twists keep coming.

Seriously, go do it. You have to read every issue of Chew at least twice to fully appreciate the subtle humor that Rob Guillory drops into the background of the panels. For instance, did you recognize the homage to Perry the Platypus on page three? But besides his jokes and hidden references throughout, Rob’s art is enough to read each issue over and over again. He continues to nail the wide range of subject manner that is presented; from a partially-cyborg-lion to Tony being force-fed a decomposing athlete’s foot.

BOTTOM LINE: DID YOU EXPECT ANYTHING LESS?

John Layman and Rob Guillory are on a 23-issue streak for creating comic greatness, and don’t expect that streak to end anytime soon. This pairing creates dynamic characterization through the writing and art, along with a plot that is well paced and entertaining. Chew #23 exemplifies everything that makes Chew what it is and earns 5 out of 5 stars.