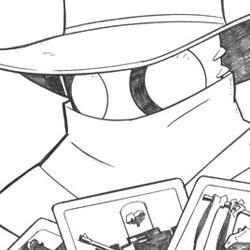 Who doesn’t love Atomic Robo?  If you said you don’t love the hero, then you should be ashamed of yourself, as you are obviously a liar.  What makes Atomic Robo great?  A combo of two things – the brilliant writing of Brian Clevinger, and the masterful pen of Scott Wegener.  Can you guess which one we are focusing on today?

Hint: His name is in the title. I just finished the last cover for our anthology, Atomic Robo Presents: REAL SCIENCE ADVENTURES! The big empty bit at the top of each illustration is to accommodate that mouthful of a title.

There will be six issues and a mess of stories. Some are super short and only last one issue of RSA, some are longer, and some stretch the entire run of this first volume.

Originally I had wanted to do each cover as a collage of the various stories contained within each issue. That proved to be a giant mess. So instead I went back to the old pulps and based each cover on a real pulp magazine or book. Except for the last one which I decided to base on a comic.