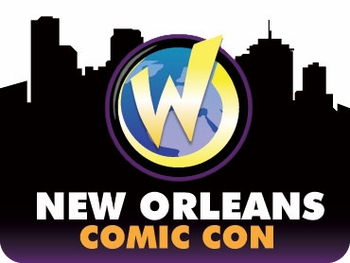 The creators will be on hand to meet fans, sign autographs and sketch.  Many Greater New Orleans and Louisiana-based artists will be in attendance as well.

New Orleans Comic Con is the first stop on Wizard World’s 2012 North American tour.  Hours are Saturday, January 28, 10 a.m. – 7 p.m.; and Sunday, January 29, 10 a.m. – 5 p.m.  Tickets are available in advance online at http://www.wizardworldcomiccon.com/neworleans.html at a savings over tickets purchased at the door.  Advance adult single-day tickets are priced at $30 ($40 on site); weekend all-session tickets are $45 ($55 on site), and tickets are free for children age 10 and under when accompanied by a paid adult (limit two children per adult).  VIP packages with special entry and exclusive items are also available on a limited basis.