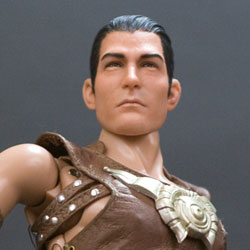 I’m pretty sure this action figure has been around for a while, but with the upcoming release of John Carter from Disney, it’s perfectly reasonable that Triad Toys is letting people know about its 12-inch John Carter of Mars action figure.

This figure has a lot of detail and over 30 points of articulation, meaning you can pose Captain Carter pretty much any way you want.

With his opening trilogy – considered one of the landmarks of science fiction – Burroughs created a vast and sweeping epic. Captain John Carter of the Confederate Army is whisked to Mars and discovers a dying world of dry ocean beds where giant four-armed barbarians rule, of crumbling cities home to an advanced but decaying civilization, a world of strange beasts and savage combat, a world where love, honor and loyalty become the stuff of adventure. The world of Barsoom.