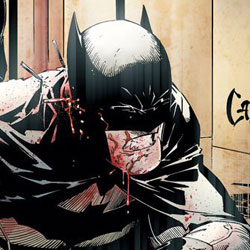 Deep beneath the city, the Court of Owls has Batman trapped. But he’s Batman… he’ll make it… won’t he? Previously in Batman: Having tracked the Court of Owls across Gotham City, Batman finds himself trapped in the one place he doesn’t want to be.

Batman has been missing for over a week, and every Bat-Family member makes a cameo appearance this issue, showing concern and stress over the missing hero. Batman, is going through his own grief, as he wanders through the maze created by the Court of Owls, and he’s slowly going mad. From the mind game dioramas to the drugged water supply, watching Batman lose his mind is both a horrible and wonderful thing to watch play out on the page. Snyder uses Batman’s inner monologue perfectly in this issue to let readers know what is going on inside the Dark Knight’s mind, while at the same time reducing the number of word balloons on the page to let you know this is all playing out in near silence below the streets of Gotham.

I haven’t had this much fun watching Batman go wacky-in-the-wikky-woo since The Cult found its way into my hands way back in 1988. While I love my dark and gritty Dark Knight Returns Batman, and think Batman: The Brave and the Bold animated series is a fun ride for kids of all ages, it’s the Batman who struggles with keeping his sanity that make some of the best Batman stories ever, in my honest opinion.

On top of that, Capullo continues to deliver art that brings life to the characters on the page. To see Batman slowly unravel and become a wreck is great, and the hugh splash page with Batman and Talon was the shock I was not expecting. I won’t completely spoil it for you, dear reader, but needless to say, somebody better get Batman a Band-Aid… a really, big Band-Aid.

After my last review, writer Scott Snyder contacted me to let me know that my mind would be blown with issue #5. I was skeptical, but willing to give Snyder another chance. Snyder and company delivers with this issue, knocking it out of the ballpark, blowing it out of the water, and whatever other metaphors exist to express something that is spectacular in every single way. From the story, to the art, to the layouts, Batman #5 is a treat that should be on your must buy list. Totally gonna read this about 10 more times today, Batman #5 earns 5 out of 5 Stars.