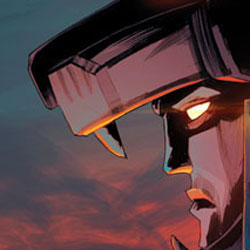 “Voltron® is the ultimate action franchise and these epic stories from Dynamite Entertainment take fans deeper into the adventure,” said Colin McLaughlin, Senior Licensing Manager, Classic Media. “After the success of the first series, we are looking forward to the unveiling of the second.” Before they were known as the legendary Voltron Force, they were Space Explorer Squadron #686 of the Galaxy Alliance — four young men, led by Commander Sven, tasked with keeping the Earth safe and the skies clear in an increasingly dangerous universe. It was no surprise that central command came to them first with an impossible rescue mission and asked them to face an enemy even they didn’t truly understand – one that threatens the fragile coalition of planets they’ve risked their lives to maintain.

“Brandon has brought a bold new edge to the Voltron Force and proven himself to be an authentic Voltron fan and skilled storyteller,” says Jeremy Corray, Creative Director, World Events Productions.  “We can’t wait for the surprising twists and turns he will bring to the secret origins of the Space Explorers and we know fans will be as intrigued as we are.”

“Finally, one of the greatest (though misunderstood) characters in the entire Voltron mythos gets a chance in the spotlight, as we dig into his time leading Space Explorer Squadron #686, soon to be known as the legendary Voltron Force,” says writer Brandon Thomas. “In the fateful missions leading up to the rediscovery of Voltron, any and all burning questions will be answered—what’s the real reason Sven’s tenure piloting the Blue Lion was always destined to be a short one? What event ensured that Keith and Lance would forever be rivals? Why has Pidge always been the most dangerous member of the team? And the biggest burning question of all—did the Galaxy Alliance send this particular squad of space explorers after Voltron because they thought they would succeed or because they knew they would fail?”

“Brandon [Thomas] is taking everything you thought you knew about the Voltron Force and turning it end over end in the most exciting way possible,” states Dynamite Editor, Joe Rybandt. “He’s getting inside the head of these characters and showing each and every one as you’ve never seen them before.”

After blazing onto TV screens in 1984, Voltron:  Defender of the Universe quickly became a top-rated animated series. Voltron features a team of five young space explorers in command of five robot lions that combine to form Voltron. The Voltron Force protect the planet Arus, ruled by Princess Allura, from the evil King Zarkon of Planet Doom and his monstrous Robeasts. Voltron is owned by World Events Productions and represented by Classic Media.

About Dynamite Entertainment:
DYNAMITE ENTERTAINMENT was founded in 2004 and is home to several best-selling comic book titles and properties, including The Boys, Green Hornet, Vampirella, Warlord of Mars, Bionic Man, Game of Thrones and more!

About Classic Media
Classic Media, one of the world’s largest independent entertainment companies, is a leader in reinventing the classics of yesterday and creating the entertainment classics of tomorrow. The Company owns and manages a globally-recognized portfolio of well-known family and pop-culture entertainment brands, including Casper the Friendly Ghost®, Where’s Waldo?®, Lassie®, The Lone Ranger®, and new brand Life With Boys™. Big Idea Entertainment, a member of the Classic Media family, is the leading faith-based studio and producer of children’s programming, including the best-selling animated series, VeggieTales®. Classic Media programming is distributed in more than 170 territories worldwide and showcased in multiple formats, including TV, film, home video, consumer products, publishing, digital, and music.  Visit us at www.classicmedia.tv

About World Events Productions
St. Louis-based World Events Productions, Ltd. (WEP) has produced and distributed children’s animation for over 25 years. WEP is the IP holder for shows including: Voltron, Defender the of the Universe, Voltron: The Third Dimension, Denver the Last Dinosaur, Saber Rider and the Star Sheriffs and Vytor the Starfire Champion, among others. WEP is a Koplar Communications company. WEP is represented by United Talent Agency. For more information visit www.wep.com and www.voltron.com.