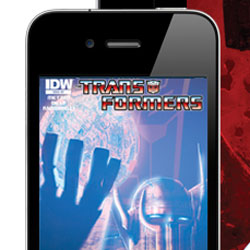 While it wasn’t Marvel who did it, IDW Publishing has announced its first digital-only comic series featuring the Transformers.

IDW Publishing proudly announces a new digital comics event five million years in the making: TRANSFORMERS: Autocracy. Released exclusively on digital platforms, this 12-part series will be released on multiple digital platforms as 8-page chapters every two weeks starting January 18th and running through June. Each episode will be priced at 99¢.

TRANSFORMERS: Autocracy has ties to the two new TRANSFORMERS comics series based on the iconic TRANSFORMERS brand from Hasbro and launching this month, Robots in Disguise and More Than Meets the Eye. “Those series look to the future,” said IDW Senior Editor John Barber, “but they have strong ties to the past. And Autocracy fills in some of the gaps in that past by telling one of the most important stories to ever appear in TRANSFORMERS comics.”

Autocracy features the stunning TRANSFORMERS writing debut of Chris Metzen – SVP, Story and Franchise Development at Blizzard Entertainment and one of the main creative minds behind the company’s Warcraft®, StarCraft®, and Diablo® universes. Metzen is joined by co-writer Flint Dille, a fan-favorite for his work on the original TRANSFORMERS animated series.

“This project is a dream come true for me,” said Metzen. “I’ve loved the TRANSFORMERS brand all my life – and the chance to take these characters for a drive with my good friend Flint has been an incredible privilege. But I think it’s Livio Ramondelli’s gritty, cinematic vision that really brings this story to life.”

Artist Livio Ramondelli came to fans’ attention last year with the world-shattering TRANSFORMERS: Chaos series. “I feel beyond thankful to be a part of this project,” said Ramondelli. “These two have written a truly epic TRANSFORMERS story for the ages. I can’t say enough good things about Chris Metzen, and we should all feel lucky that Flint Dille is returning to TRANSFORMERS.”

“IDW is very excited to launch this digital-exclusive series,” said IDW CEO and Publisher Ted Adams. “The TRANSFORMERS brand has a broad international fan-base, this series will continue to increase the comics audience.” The Autocracy series will help bring these new readers to comic shops, by including a page featuring the Comic Shop Locator service and best-selling TRANSFORMERS collections and comics. Autocracy can be found in IDW’s Apple iPad™, iPhone® and iPod touch®, apps – Transformers Comics and IDW Comics, and on the Web at read.idwpublishing.com. The series is also featured in the Comics by comiXology platform for iOS, Android, Web and Kindle Fire, and Comics + by iVerse.

About IDW Publishing
IDW is an award-winning publisher of comic books, graphic novels and trade paperbacks, based in San Diego, California. Renowned for its diverse catalog of licensed and independent titles, IDW publishes some of the most successful and popular titles in the industry, including: Hasbro’s The TRANSFORMERS and G.I. JOE, Paramount’s Star Trek; HBO’s True Blood; the BBC’s Doctor Who; Toho’s Godzilla and comics and trade collections based on novels by worldwide bestselling author, James Patterson. IDW is also home to the Library of American Comics imprint, which publishes classic comic reprints; Yoe! Books, a partnership with Yoe! Studio.
IDW’s original horror series, 30 Days of Night, was launched as a major motion picture in October 2007 by Sony Pictures and was the #1 film in its first week of release. More information about the company can be found at IDWPublishing.com.
As a recognized leader in digital comics, IDW’s digital partners include: comiXology, iVerse Media, Graphicly, Cryptozoic Comics, Panelfly, Digital Manga, Diamond Digital, NEC, Zero Sum and Smart Ebooks. The IDW digital line is available worldwide on top platforms including: Apple iOS apps and iBooks, Android apps, Barnes & Noble Nook, Amazon Kindle, Kobo Vox, Sony PSP, Nokia and RIM BlackBerry.
More information about the company can be found at IDWPublishing.com.

About Hasbro
Hasbro (NASDAQ: HAS) is a branded play company providing children and families around the world with a wide-range of immersive entertainment offerings based on the Company’s world class brand portfolio. From toys and games, to television programming, motion pictures, video games and a comprehensive licensing program, Hasbro strives to delight its customers through the strategic leveraging of well-known and beloved brands such as TRANSFORMERS, LITTLEST PET SHOP, NERF, PLAYSKOOL, MY LITTLE PONY, G.I. JOE, MAGIC: THE GATHERING and MONOPOLY. The Hub, Hasbro’s multi-platform joint venture with Discovery Communications (NASDAQ: DISCA, DISCB, DISCK) launched on October 10, 2010. The online home of The Hub is www.hubworld.com. The Hub logo and name are trademarks of Hub Television Networks, LLC. All rights reserved.  Come see how we inspire play through our brands at http://www.hasbro.com. © 2012 Hasbro, Inc. All Rights Reserved.

Apple, iPad, iPhone, iPod touch, and iTunes are trademarks of Apple Inc., registered in the U.S. and other countries. App Store is a service mark of Apple Inc.

PREVIEW: Godzilla Monsters and Protectors All Hail the King #3