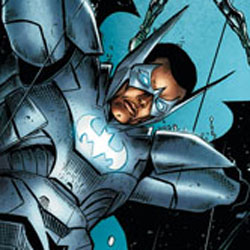 DC Comics has announced that the creative team of Dustin Nguyen and Derek Fridolf will be joining Batwing for a two-issue story arc beginning in March 2012.

Pursuing Massacre to Gotham City, Batwing enlists the aid of his extended Bat-family – including Batman, Nightwing and Robin (with an assist from Batgirl!) – to help combat the threat. But Massacre’s hunted the surviving members of The Kingdom this far, and it’ll take all of their combined efforts to stop him. It’s a massive showdown between Batwing and his arch-nemesis, in which the identity of Massacre will ultimately be revealed. This had to happen at some point at it is hard to have a Bat-family character not crossover with the rest of the Batman books without feeling like title that is only drawing readers because of the word bat in the title.