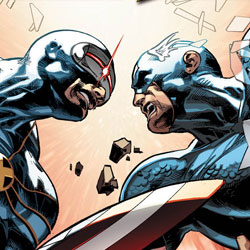 When the Phoenix Force arrives, its gonna be X-Men vs. Avengers, and the action will spill into New Avengers #24.  Marvel released the cover of the issue, that you can check out, after the jump.

NEW AVENGERS #24
Written by BRIAN MICHAEL BENDIS
Pencils & Cover by MIKE DEODATO
The New Avengers have received the call to arms by Captain America to go to war against the X-Men. Except where does the loyalty of Wolverine lie?