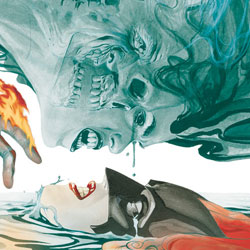 Previously in Batwoman… Kate Kane has been asked by Batman to join Batman Inc., but hasn’t yet decided whether she’s going to join. She tried training her cousin, Bette Kane (aka Flamebird) as her sidekick, but ended up kicking her to the curb. Right now she’s investigating the disappearance of a number of children at the hands of the mysterious “Weeping Woman,” the spirit of a woman who drowned herself after her own children were lost.

A Perfect Flow From Story to Art…

Batwoman has been consistently in my top three titles of the relaunch, sharing that honor with (depending on the month) Demon Knights, Action Comics, The Flash and one or two others. One of the things that those all have in common is absolutely gorgeous artwork. J.H. Williams III first came to my attention early in my comic reading career through his and Rucka’s run on Batwoman in Detective Comics, and the things he did with layouts were something I had never seen at that time. Being new to comics, they had a huge impact on how I viewed comic book art, and helped me to understand how to process a story as being told as much through visuals as through words.

Now that Williams is both writing (I believe he is plotting, and Blackman is doing the dialogue, but I am not sure) AND doing the art, that collaboration between the written words and the art has been stepped up a notch. I am often skeptical when I hear an artist is also writing a book, since it is putting a lot of pressure on one creator, but both Williams on Batwoman and Francis Manapul on Flash have made me a believer that it can be done very well. The value of the double-role of artist and writer is seen from the very first page of this issue as the “character blurb” which we see in every DC comic is broken across four panels and works with the art to create a flow reminiscent of a movie opening, as Kate is meditating and free-associating to determine how to defeat the weeping woman.

The story in this issue is good–we get a resolution to the weeping woman arc as well as the explanation of what the next arc will be, and the continuation of some subplots. One of the things I was most excited about in regards to the relaunch was the claim by DC that they’d be moving away from the six issue arc, focusing on good story telling at any length rather than writing to a fixed page count for a trade. This arc has been five issues (I guess six counting the Batwoman 0 issue, but that came out so long ago I don’t even remember if it tied into this story), and has been a fairly tight five-issue story in the relaunch. While it’s conceivable it could’ve been shortened if you cut out some subplot, it never suffered from the typical mid-arc drag that most of the prelaunch books encountered.

…And from Art to Story!

If you’ve been reading Batwoman, you’ll understand exactly what kind of art to expect in this issue. There are a bunch of gorgeous double page spreads and some beautiful experimental page layouts. Layouts in the shape of the bat symbol have almost moved past the “experimental” label at this point and into the “standard” arsenal of Williams, but there’re also some interesting water-themed layouts as Batwoman confronts the Weeping Woman.

Another artistic aspect of this book I particularly enjoy (and my wife is particularly annoyed by) is how the style of the characters is representative of what kind of character they are. Kate Kane out of costume is a differently handled character in terms of color pallette(?) and shading than in costume; there is a lot more gloss and vibrancy to the Batwoman costume than practically anything in the book, which makes her stand out and symbolizes what role she has to play in the world around her. When we see Director Bones and Maggie Sawyer of the DEO, they’re both handled in a noir art style, which clashes a bit with the world around them (hence my wife’s frustration), but I love the way the art styles are brought together.

BOTTOM LINE: Still One of the Best Books DC is Putting Out

Overall Batwoman #5 continues to be one of the top books of the relaunch, getting a perfect 5 out of 5 star rating.