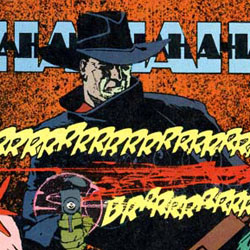 SOLICITATIONS: Chaykin’s The Shadow gets collected

Dynamite Entertainment has announced it is reprinting Howard Chaykin’s The Shadow: Blood & Judgement trade paperback from the 1980s.

The laugh had vanished…the mocking, sinister laugh that signaled doom for the petty souls whose wrongdoing stained the world.  It was gone, lost in the night that echoed it.  Now, one by one, his friends and operatives are being ruthlessly murdered.  Someone is trying to draw him out.  Thirty-five years later, it is time for him to return.  The laugh is here again.

“THE SHADOW: BLOOD AND JUDGMENT was the first job I produced after moving to California–a new state, a new studio and a new lifestyle,” says acclaimed writer/artist Howard Chaykin.  “I loved doing this book, and learned an awful lot about what it took to revive and recreate moribund characters in the process.”

“I can’t begin to describe how important Howard Chaykin’s The Shadow: Blood and Judgment was to me,” states Dynamite Entertainment President and Publisher Nick Barrucci.  “In the 80’s, it helped change the face of comics.  It is a privilege that Dynamite is able to put one of the finest comics ever created back in print!

The Shadow is back.  God help the guilty.  Be sure to get The Shadow: Blood & Judgment TPB in April 2012!

Howard Chaykin began working for Marvel Comics in the early 1970s drawing-one off stories for publications such as Marvel Spotlight. He created a short-lived sword and sorcery title, Ironwolf. In 1976, Chaykin landed the job of drawing the Marvel Comics adaptation of Star Wars that proved a great success and also got him work doing illustrations for the numerous tie-in projects. Chaykin produced a number of projects for the Heavy Metal and Star Reach anthology magazines including the space opera hero Cody Starbuck that revealed an interest in sexually explicit material as well as graphic violence.

In 1982 Chaykin launched American Flagg! for First Comics, writing and drawing the first twelve issues exclusively. The series was a massive critical and popular success, winning a number of awards. In 1985 Chaykin also wrote and drew a re-launch of The Shadow for DC Comics and produced Time2, a quasi-spin-off to American Flagg! that allowed him to indulge his love of Jazz and New York. The mini-series based on Blackhawk of 1987 was another chance to indulge in the 1930s mileu as as provide a witty recasting of a defunct DC character.

Some of Chaykin’s recent comics work includes: the graphic novel Mighty Love, the mini-series Challengers of the Unknown and City of Tomorrow, as well as a one-off issue of Solo, all published by DC Comics. Chaykin has also been active in television since the 1980s, acting as Executive Script Consultant for The Flash and Viper, and has most recently acted as head writer on Mutant X.
Howard had recently written and illustrated The Avengers: 1959 for Marvel!