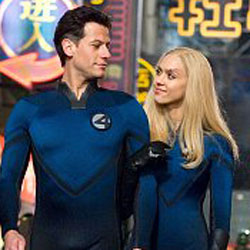 MOVIES: Has the Fantastic Four reboot found a director

It’s no surprise that 20th Century Fox is all in for a Fantastic Four reboot.  If the studio doesn’t show it is in the process of making a new film, the rights revert back to Marvel/Disney, who would no doubt do something awesome with the franchise.  But the property is still at Fox, and the studio may have found a director.

According to Variety, Josh Trank, the director of the upcoming Chronicle movie, is in the studio’s sites.

Fox is high on “Chronicle” and would like to keep Trank in business with the studio, which has displayed confidence in the pic, offering exclusive footage during the NFL’s wild-card weekend after the pic’s trailer generated massive traffic online.

There is no word if the original cast would return in this reboot (not likely), but it would be interesting to see Chris Evans as Johnny Storm again (no it wouldn’t).