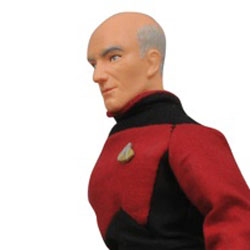 Diamond Select Toys has announced it is taking it’s Mego Star Wars line to a whole new level by introducing Star Trek: The Next Generation figures based on the old Mego style. Diamond Select Toys and EMCE Toys have teamed to bring eight inch likenesses of Captain Jean-Luc Picard and a Borg drone to fans hands just in time for the 25th anniversary of the Star Trek: The Next Generation series. Both figures are expected to ship in the summer of 2012.