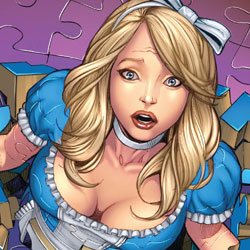 Grimm Fairy Tales presents Alice In Wonderland Issue #4
Raven Gregory (W) Robert Gill (A) Jason Embury (C)
Cover A: Sean Chen
Cover B: Stjepan Sejic
The adventures of Alice continue…
Alice escapes the clutches of the Mad Hatter and the tea party only to find herself captured by someone much worse… someone who embodies the very insanity of wonderland and who’s thirst for bloodshed cannot be matched. Hold on to your heads because it’s about to get a whole lot more insane! Zenescope’s newest Wonderland series that every fan has been waiting for is here!
Follow us back down the rabbit hole!!
32 pgs, FC, $2.99 Charmed Issue #20
Paul Ruditis (W) Dean Kotz (A)
Cover: David Seidman
Magical beings run amuck in the streets sending the powerless into hiding. Cut off from the Elders and the Angels of Destiny, there is no one to turn to for help. All hope seems lost in a world in which The Charmed Ones are no longer Charmed!
32 pgs, FC, $3.50 Charmed Volume 3 Trade Paperback
Paul Ruditis (W) Dean Kotz (A)
Photo Cover
In this night and in this hour…The years have passed quickly for The Charmed Ones since they learned of their magical heritage. In only one decade they have experienced so much love and loss, joy and sorrow, failure and success. But time marches on and new challenges will be met as Phoebe is haunted by her past, Piper must deal with the present, and Paige is forced to cope with the future. But none of those events will prepare them to face the truth behind a family secret that could change everything for the Warren line.
184 pgs, FC, TPB, $15.99 Grimm Fairy Tales Issue #71
Joe Brusha (W)
Cover A: Rich Bonk
Cover B: Anthony Spay
Free from limbo and once again on her own in the realm of Myst, Sela is desperate to find a way back to earth and save her daughter from the Dark One’s evil designs. Her quest to find her way home leads her deep into the heart of a forbidden part of Myst…to a place where it is said that no one has ever returned from…a place known only as the Tomb of Death.
32 pgs, FC, $2.99 Grimm Fairy Tales Volume 11 Trade Paperback
Various (W)
Cover: Mike Capriotti
Collecting issues #65-70 of the hit independent series. Follow a modern day Snow White, Sela Mathers, as she journeys to limbo to save her prince who is being held captive by the Mistress that rules the realm. Along the way she must battle the demons that inhabit the realm and face one of the deadliest enemies she’s ever encountered, Jack the Giant Killer.
172 pgs, FC, $15.99 Grimm Fairy Tales presents Myths & Legends Issue #15
Raven Gregory (W)
Cover A: Robert Atkins
Cover B: Marat Mychaels
Jeff’s transformation is finally complete as his thirst for vengeance grows stronger. And there is only one person left for him to make suffer for his brother’s death; the girl who broke his brother’s heart and drove him to suicide. But Jenna isn’t going down without a fight and only one of them will be making it out alive. The darkest Grimm story yet concludes here in part four of the Beauty and the Beast story arc.
32 pgs, FC, $2.99 Jumpstart Windy Hollows
Neo & Adira Edmund (W)
Cover: Caravan Studios
From the award-winning educational software and kid favorite gaming website Jumpstart.com, arrives the first ever Graphic Novel from JumpStart and Knowledge Adventure! Come visit Windy Hollows and follow our group of adventurers: Logan, Maggie, Nicolas, Selena and Poe as they arrive at Oakcrest School of Magic. They discover their teacher absent with a note left behind, Follow them as they venture into Windy Hollows and embark on a series of quests to undo a potion that went terribly wrong. Bonus Sticker Pages… create your own comic with the JumpStart friends!
64 pgs, FC, TPB, $5.99 ALL AGES

Grimm Fairy Tales presents The Jungle Book Issue #1
Mark L. Miller (W) Carlos Granda (A)
Covers A, B, C & D: Ale Garza
Incentive Cover: Mike DeBalfo
A pirate ship carrying four children crashes on the shore of a mysterious and merciless jungle. Each child is taken by a separate tribe of animals as a means to keep the peace between the species. It is a peace that will not last… Fifteen years later the children have now become young adults and each will have to face the destiny that awaits them in the unforgiving jungle. A place here only the strong will survive. Zenescope brings you their newest reinvention of a classic tale that is going to blow you away! Featuring four connecting covers by Deadpool artist Ale Garza and DC superstar colorist Nei Ruffino and a retailer incentive cover by Zenescope superstar artist Mike DeBalfo!
32 pgs, FC, $2.99 Jurassic Strike Force 5 Issue #4
Joe Brusha (W) JL Giles-Rivera (A)
Cover A: Ciao Cacau
Cover B:
Pasquale Qualano
With his DinoSoldiers defeated, the evil alien overlord Zalex is far from beaten. He still has an ace up his sleeve that promises to be more than the Jurassic Strikeforce 5 can handle. It’s a secret weapon so powerful that it may just be a matter of time before it makes Rex and the rest of the Strikeforce team completely extinct!
32 pgs, FC, $2.99 ALL AGES The Theater Issue #5
Raven Gregory (W) Novo Malgapo (A)
Cover A: Sean Chen
Cover B:Ale Garza
When a man wakes up to find that the world around him has begun to forget him one by one, he will have to discover the source of the curse that threatens to erase his very existence before it’s too late. Meanwhile, a detective is closing in on the secret of the Theater and the family of psychopaths running the show will need to make a terrifying decision.
32 pgs, FC, $3.99 World’s Most Dangerous Animals Trade Paperback
Various (W)
Cover: Steambot Studios
Grizzly Bears, giant Salt Water Crocodiles, rogue Lions… we don’t occupy a place on their list of usual prey items and rarely do we cross paths with these deadly predators. Still, on occasion, the most dangerous animals in the wild set their sights on humans and when they do the results can be devastating. This first book in Silver Dragon Books Animal Planet series looks at these terrifying encounters and illustrates what happens when humans interact with the World’s Most Dangerous Animals. ALL AGES
120 pgs, FC, TPB, $9.99