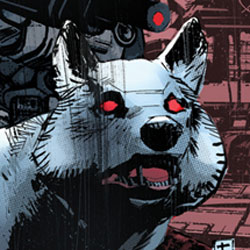 Image Comics is proud to announce the March release of MARKSMEN VOL. 1 TP, written by David Baxter, illustrated by Javier Aranda (Star Trek: The Next Generation: Ghosts) and Garry Leach (Judge Dredd, Marvelman), co-created and edited by Dave Elliott and produced by Benaroya Publishing. MARKSMEN VOL. 1 TP collects issues #1-6 of the sold out miniseries and will include a never-before-seen 4-page illustrated introduction to the world of MARKSMEN, an epilogue from 5 time Hugo Award winning science fiction novelist Vernor Vinge and extras such as a gallery page of covers by acclaimed artist Tomm Coker (Daredevil:Noir, Undying Love).

Based on real life economic hardships, MARKSMEN takes place in dystopian world just one step removed from our own. After a massive recession, the United States government collapsed and a civil war erupted between the cities and states to keep any last resources to themselves. This destroyed our country’s infrastructure and most of its population…the Big Collapse.

Out of the ashes rose New San Diego, one a few cities that survived by cutting itself off from the outside world. Rebuilt by a group of top scientists and protected by the Navy Seals stationed at the Coronado Navel Base, NSD became a technological utopia. After sixty years war threatens to break out again when another state attempts to occupy the city, seizing their resources.Their only hope for survive rests with the ancestors of the Navy Seals who protect the city as… MARKSMEN. ABOUT DAVID BAXTER
David Baxter is a writer/producer whose first feature film, Shooting Lily, won the 1996 SXSW Film Festival. Dave is making his comic book debut with Benaroya Publishing and Image Comics on the title MARKSMEN. Dave is also the recipient of the 2004 Alfred P. Sloan Foundation/Tribeca Film Institute screenwriting grant for two science themed film projects he currently has in development. He previously wrote for Star Trek: Voyager and became a member of the WGA when he wrote an epic racing film called Nuvolari for 20th Century Fox. He recently completed Speed King, a biopic about murdered racing legend Mickey Thompson for Bandito Bros and Producer/Director Mike McCoy.

ABOUT JAVIER ARANDA
Javier Aranda is a Spanish artist who’s worked with publishers like DC Comics, Marvel, IDW, Devil’s Due Press, Avatar Press, and most recently Image Comics and Benaroya Publishing. He is best known for his work on Star Trek, World Of Dungeons & Dragons, Infinity, Inc., Hellina, and MARKSMEN. Javier has also published several short-stories and collaborated with other artists and writers on several Spanish market magazines, books, storyboards, and merchandising.

ABOUT GARRY LEACH
Garry Leach is a British artist known for his work on MARVELMAN with writer Alan Moore and as one of the founders of Atomeka Press with Dave Elliott. Garry is co-creator of Warpsmith and has worked on titles like Judge Dredd, THE V.C.s, Global Frequency with Warren Ellis, and has illustrated cards for the Magic: The Gathering collectible cards game.

ABOUT BENAROYA PUBLISHING
Founded by Michael Benaroya in 2009, Benaroya Publishing is a comic book and graphic novel production company dedicated to thrilling and compelling storytelling. A subsidiary of Benaroya Pictures, Benaroya Publishing is based in Los Angeles, California and launches their debut titles this Spring under the Image Comics label. With David Elliott (FALL OUT TOY WORKS and co-founder of RADICAL PUBLISHING) at the helm as in-house Editor-in-Chief, Benaroya Publishing promises to bring fresh new ideas, and uniquely told stories to the comics literary world. For more information, visit www.benaroyapublishing.com.