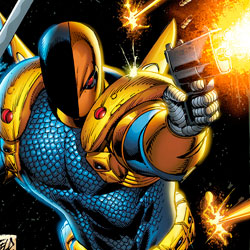 DC Comics has announced, that in May, writer/artist Rob Liefeld will take on “an expanded role” in the New 52.

Beginning with the ninth issues, Liefeld will be writing and illustrating Deathstroke, plotting The Savage Hawkman, and plotting Grifter.

“Deathstroke is tasked with the greatest challenge of his life, taking on the most dangerous prey in the galaxy…LOBO!” said Liefeld. “The galactic criminal has escaped from his terrestrial prison where he has been housed for years. He is free and ready to settle the score! And what is the secret of the OMEGAs and what role will they play in the deadly showdown?” For The Savage Hawkman, Carter Hall will travel across the world to find answers about his connection to the Thanagarians, and why everyone is after the Nth metal weapon.  Liefeld also plans to expand the consequences of Cole Cash’s actions in Grifter, and we might even get to see a fan-fave WildStorm character appear in the book.