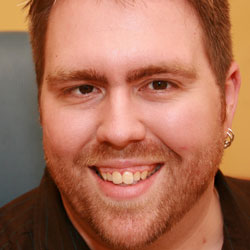 Powell is currently the General Manager and Chief Relationship Officer of Lone Star Comics & mycomicshop.com, based in Arlington, Texas. During his 20+ year career in comics, he not only helped manage the very successful Lone Star business, but also served as a Founding Board Member of ComicsPro, and as President of the Comic Book Legal Defense Fund Board. Chris will begin his new position at Diamond in March. In the meantime, he will remain at Lone Star assisting owners Buddy and Judy Saunders as he transitions to Diamond.

Diamond announced the creation of this new executive-level position last Fall. The top priority of the job will be to “spearhead the design and implementation of supplier supported programs to encourage and assist current CBSM retailers to improve and expand their businesses, with an emphasis on creating additional brick & mortar locations.” In his new role, Powell will be based at Diamond’s Home Office in Timonium, and report jointly to Diamond Executive VP & COO Chuck Parker, and VP Sales & Marketing Roger Fletcher . “We created this new position because we believe in print comics and the future of the direct market,” said Parker. “We‘re coming off an exciting year in 2011, and we think there’s continued opportunity for growth in our industry. We believe that Diamond, working in conjunction with our suppliers, can do more to help existing retailers grow, and to help new retailers get started. I am truly very excited to have Chris working with our team on this very important goal. ”

“We’re very pleased that Chris will be joining Diamond,” added Fletcher. “His successful hands-on experience in every aspect of comic retailing, and his strong relationships throughout the industry, make him uniquely well-suited for the position.”

Said Powell: “As soon as I read the job posting from Diamond, I knew this was something I had to pursue. The Direct Market has been very good to me in the 21 years I’ve been at Lone Star, and this is a unique opportunity to give back. It’s going to be a big job, but I’m looking forward to diving right in!”

ABOUT DIAMOND COMIC DISTRIBUTORS (DCD)
Diamond is at the nexus of comics and pop culture. Based in Baltimore, MD, DCD is the world’s largest distributor of English-language comic books, graphic novels and related pop-culture merchandise, serving thousands of retailers worldwide. For more information, visit Diamond on the web at www.diamondcomics.com.