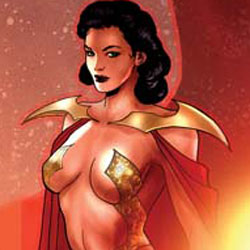 In our darkest hour, he could save every one of us. FLASH!

Previously in Flash Gordon: Zeitgeist: The Earth is being bombarded with meteors sent from the planet Mongo. Ming the Merciless is in cahoots with Adolf Hitler, and it looks like the planet is about to be taken over. Fortunately, Dale Arden, Dr. Zarkov, and Flash Gordon are rocketing to the planet to check it out. Too bad they were captured just as they landed.

It’s out of the frying pan and into the fire for Dale and Flash, as they are brought before Ming the Merciless. While the exchange is pretty generic, and Trautmann writes Ming like Max von Sydow chewing scenery in the movie, readers do get to see all the players of Mongo, including King Vultan – though as written in the one panel we see him, he doesn’t bring the exuberance of Brian Blessed to the story. However, if one listens to the Flash Gordon soundtrack, and specifically Brian May’s Flash theme, the issue feels like I’m hearing the lifted lines from the movie appear in the book. Now it’s been years since I’ve seen the movie, so old age, and childish glee over reading this issue may be playing tricks on me, but that is how reading this issue felt. While the first issue paid homage to the classic strips, this issue felt like an homage to selections of the 1980 movie.

When Flash is thrown into the arena to die, instead of spending the entire issue with Gordon dealing with one big fight, Trautmann gives readers a battle montage as Gordon defeats wave after wave of alien monsters from all over, all while Zarkov give us a voiceover that builds Gordon as the one that could save every one of us. And that little seed, and Flash’s ability to defeat all that come before him, have several fractions of Ming’s court ready to try and overthrow the dictator, including Ming’s Daughter (described delightfully as Aura, Daughter of Ming. A Piece of Work), who helps Gordon escape in a rocket.

When the issue opened with Hitler kowtowing to Ming, followed by Ming and his aide discussing at length how wonderful Ming is, I wasn’t sure the issue would feature any action, but Trautmann ends up delivering an issue that is packed with action. And that may be part of the problem. While I liked how quickly the issue moved, it seemed too compressed and felt rushed, almost like Dynamite is trying to get through this first arc as quickly as possible. I’m sure that isn’t the case, given the nature of the property, but it kind of felt that way.

Daniel Indro throws a little bit of everything into this issue – from the whacked out futuristic sci-fi communicators, to the Doc Savage inspired ripped shirt Flash wears early in the issue. The detail is quite high, as the art team goes so far as to draw scanlines on the transmissions from Ming to Hitler’s inner chamber. There are times where too much detail isn’t a good thing, as flexing muscles reveal arteries and veins that would put the bulkiest of wrestlers to shame. Also, some of the shading looks off, as environmental lighting and shadows on characters just don’t line up right.

This issue has a story that moves quickly, gives the reader a lot of action, and presents everything in a way that feels familiar. The second issue is just as strong as the first, and is worth checking out. The art stumbles in a few places, but I’m willing to overlook that, providing we get to see Flash take on a fleet of winged men in the near future. Flash Gordon: Zeitgesit #2 earns 4 out of 5 Stars.