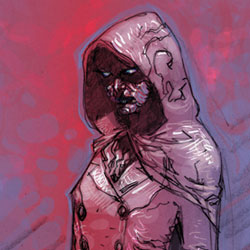 DC RELAUNCH: Her name is Pandora

There’s probably a good reason why DC did not release the name of the mysterious cloaked woman that was seen at the end of Flashpoint and all throughout the New 52 number one issues. The company finally gave her a name, and it could be read a couple of different ways. Here name is Pandora, and had the company released the name too early, I think a lot of pundits would have equated the name with the trouble DC was about to unleash on the world. Fortunately, the relaunch wasn’t a disaster, but now I wonder what the publisher has in store for her. Do I need to go back and re-read pre-relaunch Wonder Woman comics? Is there a big event coming that will put all of this into perspective? Will we see this event tie into the 52 worlds that are apparently out there, and thus by the end of 2012 we have a DC Ultimate Universe?